My little fig tree put on a lot of new growth this year. Let me qualify this statement. By “fig,” in this case, I mean my weeping fig (Ficus benjamina). It’s a relative of edible fig, also edible (but rarely eaten), and a common houseplant, valued for its relaxed appearance, its small, glossy green leaves, and its tolerance for indoor environments. By “a lot of new growth,” I mean a half an inch or so. 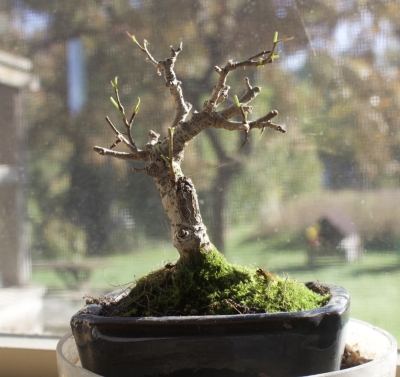 Despite that meager growth, the plant has grown too large. Nothing like it would have grown outdoors in open ground in the tropics, where this trees’ branches quickly soar skyward and sideways to the size of our sugar maples. From those branches drip aerial roots which anchor themselves in the ground, the ones nearest the trunk eventually merging together to become part of a fattening trunk. 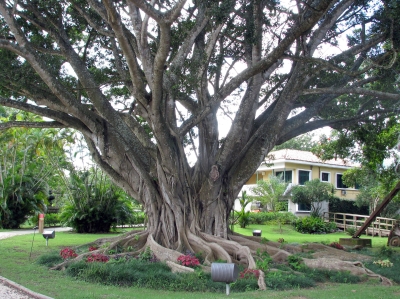 My little fig, you probably guessed by now, is a bonsai. The tree, if I may call a four-inch-high plant a “tree,” began life here as one of a clump of what evidently were rooted cuttings in a small, plastic pot I purchased on impulse from a big box store.

Back here at the farmden, I got to work on it, first teasing the plants apart from each other, selecting one as keeper. The road to bonsai-dom began as I trimmed back the roots to be able to fit the plant into its new home, a 3 by 4-1/2 inch shallow pot about an inch deep. There was little to prune aboveground, but I made any cuts necessary, with the future in mind.

Jumping forward in time, bonsai fig is now a tween, eleven years old. And it’s time for its annual preening. The goal of this preening is to keep the plant small and proportioned to its shallow pot. Like any plant, bonsai fig periodically needs new root growth for mineral nutrition and young leaves for photosynthesis. This plant, like any bonsai, must manage this (with my help) without growing larger and larger. Here is how all this is possible:

The first thing I did was look at the plant and admire its form. 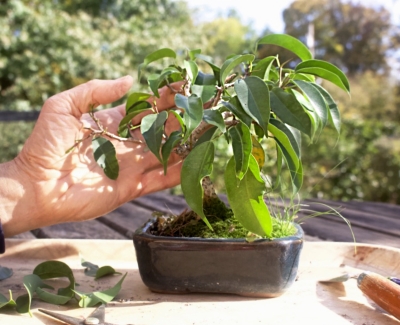 The plant’s trunk and main limbs look gnarly and wizened even if the trunk is only about three inches high and those main limbs don’t have much more heft than that of toothpicks. After a summer outdoors in part shade and regular watering, the leaves look strong and healthy, worthy dressings for those limbs.

The leaves, like the rest of the plant, are diminutive as compared with their counterparts in the tropics, even their seven-foot-tall potted houseplant counterparts. Which brings me to my next move. That was to cut off all the plant’s leaves. 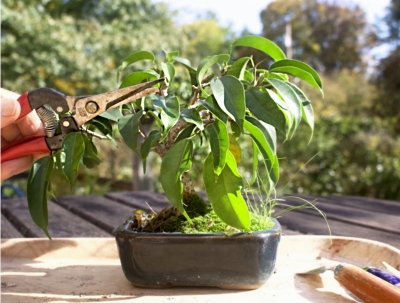 I do this twice a year. One effect of defoliation is to reduce the size of new leaves that grow in, so they’re more in proportion to the size of the plant and the pot. Removing leaves also reduces water loss, important for a plant that will be root pruned and be temporarily less able to absorb water.

With the plant stripped of its leaves, I next trimmed the branches — the most difficult part of this whole operation. 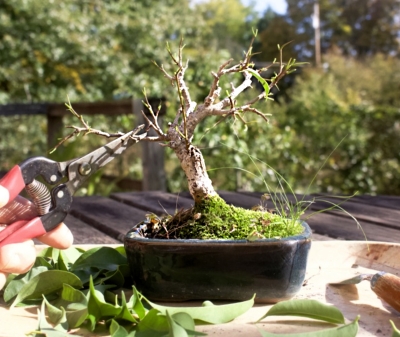 As I study the limb structure, I keep an eye out for what looks right and what new growth would enhance the appearance. A dead limb or branch isn’t an eyesore or something necessarily needing removal in a bonsai. Wild trees often have some dead limbs, adding to their wild appearance.

As with any plant, shortening a stem coaxes buds on the remaining portions of the stem to sprout. Removing a stem right to its origin generally elicits no response.

I avoid getting uptight over what and where to snip with pruning shears by reminding myself that plants grow, so errors can be corrected in the future. Sometimes the plant takes it upon itself to grow a particularly well-placed or craggily bent shoot.

With pruning completed, I come to the final, easy part of the operation: root pruning. The roots need some pruning so that new roots can grow in that small amount of soil I provided. And old soil, spent of nutrients, can be replaced with new soil.

I lift the plant out of its pot, turn it over, and tease soil from between its roots. Not too much, though. I leave the surface layer intact, mostly to preserve the lush, green covering of moss that has developed beneath the tree.

With some of the soil teased out from below, I comb out a few of the roots and then clip them back. 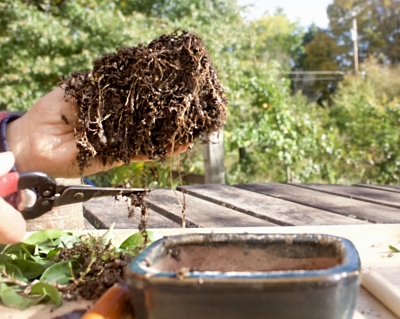 Finally, I put a layer of new soil in the bottom of the pot, just enough so the plant will sit at the same level in the pot as it did previously. 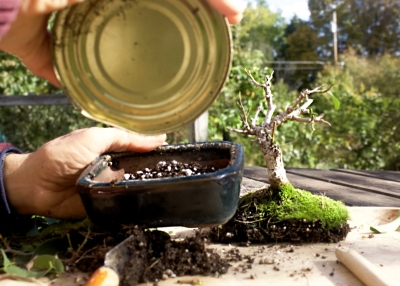 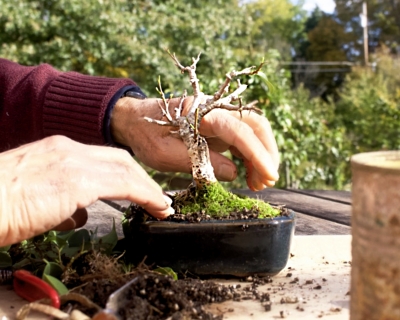 The “soil,” in this case, is potting soil. I make mine from equal parts compost, peat moss, perlite, and soil, rubbed through a quarter-inch sieve.

What I’ve described is basic maintenance of a fairly simple bonsai. In my book, The Pruning Book, I devote a whole chapter to bonsai, from starting a new plant to training, and maintenance. Quoting from The Pruning Book, “More than a ladder marks the difference[s] in technique . . . from a bonsai as compared with a full-size tree.” Gouging out where a large cut is made in order to create a slight hollow or wiring limbs to force them to bend a certain way are some of the details covered.

With good maintenance, a bonsai plant can live for decades, even centuries! I wrote “A bonsai planting portrays, in miniature, a natural theme — the rugged beauty of a gnarled pine on a windswept slope, the tranquility of a grove of larches, the joyousness of spring in the cascading branches of an old fruit tree bursting into bloom.” Already, at eleven years old, bonsai fig has begun to portray, in miniature, an old tree in a verdant field. 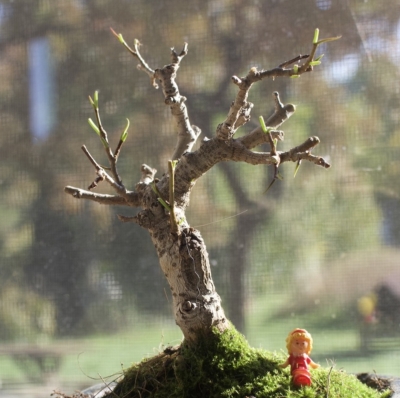