After last year’s bumper crop of black walnuts, filberts, and acorns, I didn’t expect much this year, nutwise. As I looked up into the few black walnut trees bordering the farmden, my low expectations seemed justified. In desperation of securing my annual supply of black walnuts, I gave a shoutout to the local community for black walnuts. I got good feedback — of trees, trees that, as the nut season approached, proved to be barren.

Then, a couple of weeks ago, I noticed a few black walnuts on the ground beneath a couple of my favorite trees right here. A few days later, the ground was littered with nuts, perhaps not as much as in previous years, but still plenty. So it was time to get to work (details a few paragraphs ahead). 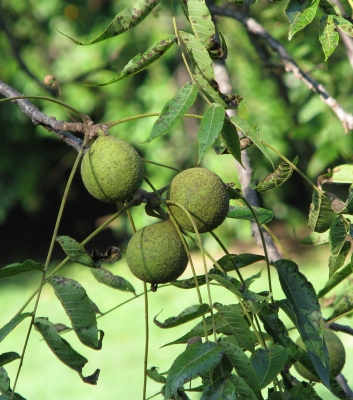 Too many people have never tasted a black walnut. That’s too bad. The nuts are distinctively delicious (if you like them). I much prefer them to English walnuts, the nut usually referred to when anyone says“walnut.” Black walnut trees grow and bear relatively quickly, casting a pleasant dappled shade beneath their limbs. Just don’t plant one or allow one to grow where tennis ball size fruits littering the ground each fall would be objectionable.

Black walnut trees are abundant over much of central and eastern North America. The nuts are free for the picking, and usually yield more than enough to satisfy humans and squirrels alike. Many a homeowner who’d like to get rid of the nuts strewn over their front lawn will let you come and pick them up. A homeowner once even gathered them up for me!

The major downside to the nuts themselves is getting to the nutmeat.

I’m always trying to streamline my black walnut gathering and processing. To gather enough five-gallon bucketfuls of nuts, my tack this year was to try one of the many wire basket nut gatherers. I was skeptical, especially since a smaller model had proven totally ineffective for gathering filberts. (The manufacturer informed me that it only works on a smooth, mowed lawn; my filberts grow in occasionally mown grass on lumpy ground.) But as I rolled the large nut gatherer over walnuts strewn over similarly lumpy, occasionally mown ground, the nuts popped through the wires in the basket. Each time the basket filled, I spread the wires over a bucket, and shook out the nuts, filling each 5-gallon bucketful in about 10 minutes. 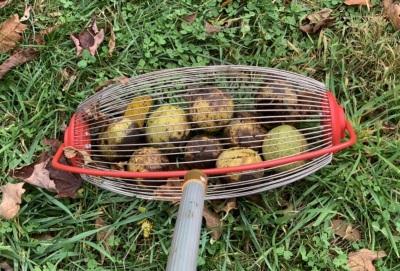 Next comes husking, for which there are all sorts of techniques. My friend Bill likes to stomp on the nuts where they lay to scare the husks loose or off. He then makes like a player dribbling a soccer ball, kicking them into tight clusters, where he can bend down to pick up and plunk the nuts into a bucket. That works pretty well but is too slow for me. (Bill stocks up on a lot less nuts that I do.)

I’ve also tried driving back and forth over unhusked nuts spread over the driveway. This works to some degree but the tractor or car tires always miss some, which must be separated from the ones with loosened husks. Those loosened husks still need to be rubbed off by hand from the nut itself. It’s too many steps.

A tap from a light sledge hammer usually allows the husk to loosen enough to be easily twisted off.

One method that I’ve never tried but had good potential was to let the husks weather till they’re dark and soft, then dump them into a big garbage pail with plenty of water. Using a grout mixer attached to a powerful drill stirs the nuts up enough for them to shed their hulls. Finally, you pour the mess through some sort of (probably homemade) one-inch screen, washing the nuts with plenty of water.

My current preferred method — and I am very open to other suggestions — is to mount a thin but sturdy length of metal, perhaps a saw blade or a concrete finishing trowel, upright in a block of wood. 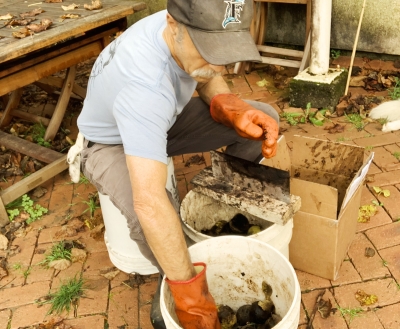 Then roll the nut in the husk along that edge, turn it slightly left or right at the end of the roll, and then lift it and twist off the two halves of husk. The husked nut drops into one bucket; the husks get tossed into another bucket. Walnut husking video

Clean Them Up, Then Wait No matter what the method, after all is said and done, the nuts need to be cleaned and cured. 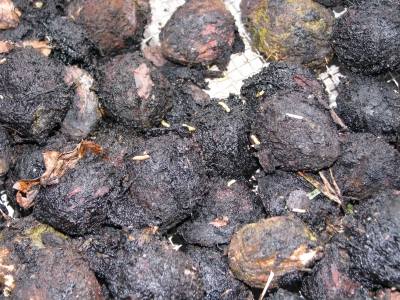 Bill uses his pressure washer. I used to spray the nuts down with my hose and spray nozzle; nowadays I get them cleaned up in harvest boxes in the bed of my truck at the self-serve car wash. I know of real nut-heads who want the nuts very clean, probably unnecessary, and in quantity finishing the job in a used top-loading washing machine. No soap necessary.

People often are turned off to black walnut because they taste them as soon as possible after husking them. Don’t. The nuts need to be cured, which means stored in a cool, dry, squirrel-proof location for a couple of months or more. 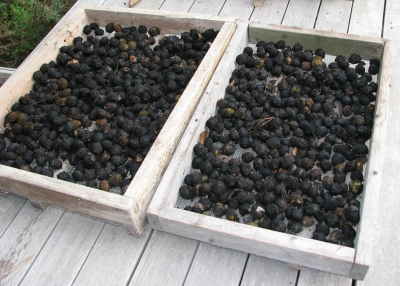 Up to the point of being dry, be careful at any stage of processing black walnut of the plant’s dark stain. It readily stains your hands, clothing, and other materials. Or put the stain to some use, staining fabric or wood.

The stain is similar in color to iodine which has led many people via many websites to claim that black walnut extract is high in iodine. Not so, they just look similar. Even black walnuts growing in the Great Lakes, Appalachian and Northwestern regions of the United States, where soils are typically deficient in iodine, have iodine-colored stain.

Finally, Cracking and Eating Finally comes cracking the nuts, also admittedly not easy. The hard shells are used commercially, ground up, for blasting, tumbling, cleaning, polishing, and filtration. Forget about using a hammer and an anvil or concrete floor to get at the nutmeats. It works, but it’s slow and you’re sure to occasionally hit a finger.

Black walnuts could be what inspired the phrase “a hard nut to crack.” The phrase is attributed to Ben Franklin; I can just picture him cursing, jumping up and down, and looking like he was trying to shake water from the finger just bruised from cracking a walnut. My “picture” is probably fiction.

Nonetheless, if Ben had been cracking black walnuts and had the very best cracker, the Master Nut Cracker,* his fingers would have been free of trauma. 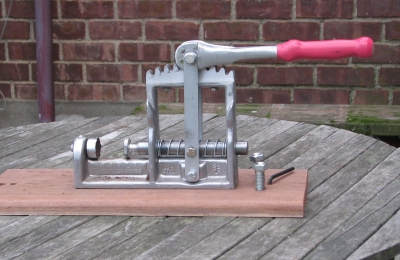 And nobody might have ever uttered that some problem, some thing, or some person was a hard nut to crack.

*The Master Nut Cracker is worth buying not only for its effectiveness but also for its elegance of design. Worth every penny. But get the real Master Nut Cracker (http://www.masternutcracker.com/about.html), not one of the inferior aluminum knockoffs. 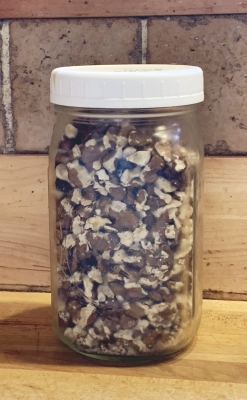