A horticultural calamity averted. Again. Deb was snipping some leaves from our potted rosemary “tree” for salad dressing and said she noticed that the plant looked a little wilty. I was skeptical. Rosemary leaves are so narrow and stiff that they hardly broadcast their thirst. Still, quite a few rosemary plants have succumbed to winter drought here. 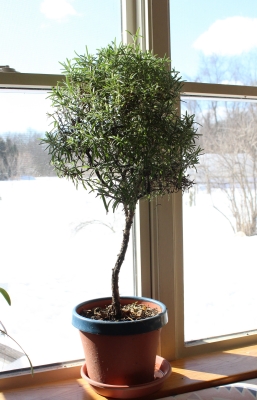 I checked the plant and, in fact, the leaves did look a bit wilty. The probe of my sort-of-accurate electronic moisture tester (which I nonetheless highly recommend) confirmed Deb’s diagnosis. The soil was very dry but, luckily, not to the point of killing the plant.

Allow me to digress . . . Soil scientists represent soil moisture levels with four descriptors. Right after a thorough watering, a soil is “saturated,” with all pores filled with water. Saturation is not desirable in the long term because roots need to “breathe” to do their work of drawing in nutrients and water, which is why plants exhibit the same symptoms from either dry or sodden soil.

Without additional water, gravity begins to pull water down and out of the larger pores of a saturated soil. Once gravity has pulled all the water it can from a soil, the soil is at “field capacity,” much to the pleasure of resident plants. At this point, large pores are filled with air yet some water, which is available for plants, is retained within smaller pores and clinging to soil particles.

Roots continue to slurp more and more water from the soil, but with increasing difficulty because water within even smaller pores and clinging even closer to soil particles is increasingly tightly held there by capillary attraction. Although the soil has moisture, it’s mostly inaccessible to plants. “Wilting point” has been reached.

Eventually, the only moisture left in the soil is that held very tightly in the very smallest pores and pressed tight against soil particles. That’s “permanent wilting point” from which, as the name implies, there’s no turning back. The plant will die.

The actual amount of water in a soil at any of these stages depends on the range of particle sizes in the soil. Clay soils have tiny particles, with tiny spaces between them, so have more water at wilting and permanent wilting point than do sandy soils, with their large particles and large pores. 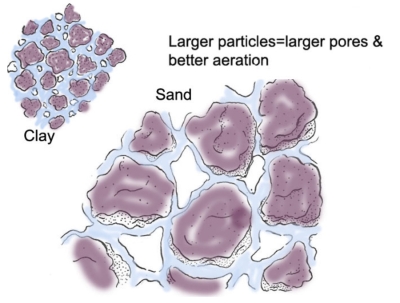 At or near field capacity, sands have more air and less water than clays.

Where were we? Oh, my rosemary plant. I’m figuring it was just teetering on the edge of wilting point. Needless to say, I watered both my rosemary “trees.”

(For a lot more about soil water and how to make the best of it, see my book The Ever Curious Gardener: Using a Little Natural Science for a Much Better Garden.)

You’d think — I once did — that rosemary, because in the wild it billows down dry hillsides overlooking the Mediterranean, would be resistant to drought. It does tolerate dry air. But those wild plants’ roots are in the ground where they can forage far and wide for moisture; not so in a pot.

Also, my rosemary plants are coddled with relatively consistent warmth in winter and a potting mix rich in nutrients. Couple this with low light conditions, even near a south-facing window, and you get very succulent growth. I don’t know what rosemary plants growing on a Grecian hillside are doing now, but my plants are growing like gangbusters. All that succulent growth transpires lots of water, and is very susceptible to drought. 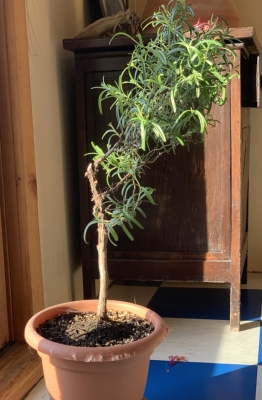 Left half of this rosemary expired last summer

Once my plants go outdoors in summer, their leaves mature and toughen and growth is less succulent. They do still need sufficient moisture, so I have drip tubes on a timer quenching their thirst (and that of other plants). Except, that is, when the timer’s battery needs replacing and I don’t notice it. That was last summer. The plants were not at the permanent wilting point but a number of branches, which I pruned off, dried up, dead.

In Praise of Potted Rosemary

All this is not to frown upon growing rosemary where it can’t survive winters outdoors. On the contrary, I consider rosemary to be the finest herb for indoor growing. Flavorwise, it packs a powerful punch, unlike chives, for example, a plant that needs to be practically decimated if you really want to flavor something with it. Merely brushing against my rosemary plant releases an aromatic, piney cloud.

Rosemary is also a very attractive houseplant whether grown as a scraggly shrub reminiscent of the wild plants in their native haunts, trained as dense cones, or — as are my plants — as miniature trees. The leaves retain a healthy, verdant look, unlike those of basil, which look sickly and out of their element in dry, relatively dark and cool homes in winter.

Rosemary also rarely suffers from any insect or disease problem.

And finally, properly cared for, rosemary is perennial so can provide aroma, flavor, and beauty   for many, many years.

But you and I do need to pay close attention to watering. 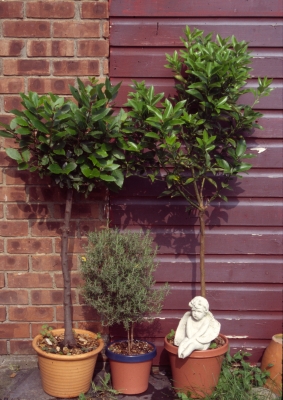 Rosemary, with its compatriots, bay and citrus, in summer