I’ve written recently about how bountiful this past season has been with fruits. Well, botanically, at least, “fruits” includes “nuts.” More on this later.* The nut harvest was also abundant.

Except for last year, just about every year has been a good year for black walnuts. But this year,  it didn’t take long to pick up and fill baskets quickly. After being husked, cleaned, and then left to cure in a squirrel-proof loft, I’ve started cracking them (with my ‘Master Nutcracker’). Large, plum, tasty nutmeats drop free from the shells. 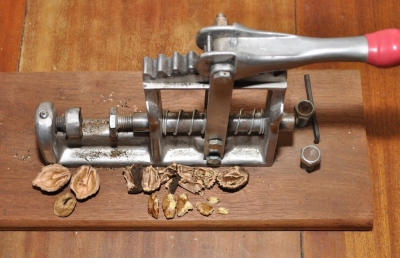 What surprised me most was the harvest of English walnuts, botanically Juglans regia and also known as Persian walnuts. (The moniker “English” may be because of the significant role played by English sailors in distributing the nuts around the world.) Persia, or Eastern Europe is where this plant originated. Early on, humans introduced it to other parts of the world, including England, where Romans brought them 2,000 years ago. In the seventeenth century, the nuts and the wood of these trees was held in such high esteem in parts of Europe that a certificate of having planted a certain number of trees was needed before a man was allowed to marry.

Walnuts arrived in my garden in 2006, from seed from cold-hardy trees handed out at the Saratoga, New York meeting of the New York Nut Growers Association. I planted six of the walnut seeds. Because I have limited space and did not have high hopes for success, I arranged them in two stations of three plants each, with about 30 feet between the stations. In contrast to plants propagated asexually, such as by grafting or cuttings, plants grown from seed have some genetic diversity, in the same way you and your siblings are diverse from each other. I figured that eventually I would remove all but the one best tree at each station.

Despite the threat of frost killing blossoms in spring, walnut blight, defoliation by anthracnose disease in summer, and squirrels robbing all the nuts in fall, I was able to harvest plenty. Earlier in the season, I did notice that not all trees were bearing, or bearing well, so I cut down two of the slackers, one from each station. 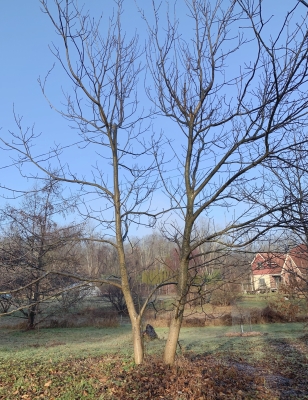 As far as differences in the nuts from tree to tree, it’s hard to say for sure at this point except to say the nuts on one of the trees may have been smaller. I’ll take a more quantitative look next year.

Walnut trees are known to be slow to come into bearing. There’s a Flanders folk saying that goes, “By the time the tree is big, the planter surely will be dead.” Well, I planted the trees from seed, they have borne and grown fairly big, and I’m not dead.

Two nut trees whose first fruits I’m eagerly awaiting are both shellbark hickories (Carya laciniosa). Shagbark hickory (C. ovata) is very common around here and throughout eastern U.S., and is notable for its — duh! — very shaggy bark and tasty but small and hard to crack nuts. 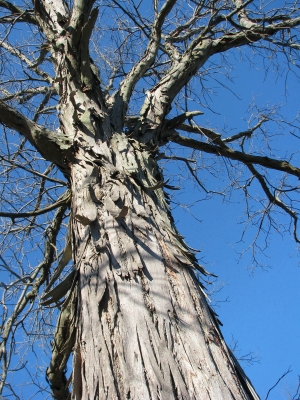 Shellbark hickory’s native range doesn’t extend as far east and south as shagbark’s. It’s found mostly along the Ohio and Mississippi Rivers, and bordering regions; nowhere, though, is it common. Also, the bark is less shaggy. The clincher is that shellbark nuts are much larger, around two inches long, and with thinner shells, so you get more bang for your buck with each nut you crack.

I planted the varieties Simpson and Grainger, both of which were selected for easy shelling. (Nut alert! I have since learned that Grainger is, in fact, a shagbark hickory, albeit a variety selected for large shells that crack out well.)

But how about some nuts! Simpson was planted in 2014 and Grainger in 2015, and both grow very slowly, about twelve inches per year. Bearing age is reputedly only a few years with a grafted trees, which, being named varieties, both were.

Nuts or no nuts, the trees are beautiful, their leaves turning a rich, golden yellow in autumn and, in winter, the stout branches punctuated and capped by fat buds. 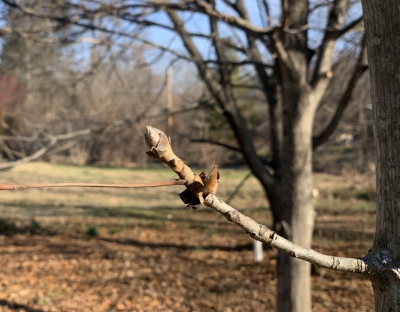 Botanical Nuts, and Not

*Back to fruits: A fruit, botanically, is any seed-bearing structure of a flowering plant formed from a ripened ovary along with seeds and other structures. A nut is a kind of fruit, in this case with a kernel surrounded by a hard nutshell. A nut’s shell does not open to release the kernel. So all nuts are fruits but all fruits aren’t nuts. Botanically speaking.

Some fruits commonly called nuts, such as almond, pistachio, Brazil nut, walnut, pecan, and macadamia, are not true nuts; they are dry drupes (which doesn’t sound very complimentary, does it?). A nut is a dry drupe whose kernel is enclosed within a stony pit surrounded by flesh and a skin. Think of a peach. That’s a (non)dry drupe.

Chestnut, hazelnut, oak, and birch are examples of true nuts.

That’s all botany. Out on the street, we call lots of things nuts. Peanuts, for example, which are actually legumes, just like peas and beans.