You say “tomayto,” I say “tomahto.” You say “filbert,” I say “hazelnut.” (“Filbert” is from St. Philibert, to whom August 22nd, is dedicated and which is the day of first ripening of hazelnuts in England.) Although hazelnuts originally referred to native American filberts, hazelnut and filbert are now equivalent.

It’s been over twenty years since I planted my first hazelnuts. Fortunately, hazels bear quickly, often within 3 or 4 years. Unfortunately, a disease called eastern filbert blight can decimate the trees, and not begin to do so for about a decade. Our native hazels (Corylus americana), having evolved with the blight, are resistant. Not so for European hazels, which are the hazelnuts of commerce. 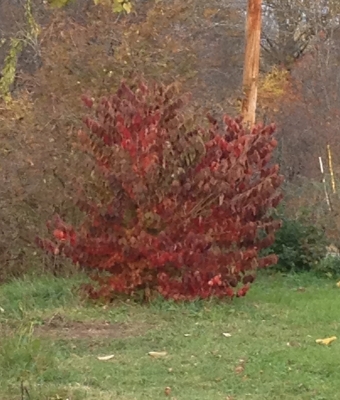 My first planting was of our native hazel, which I planted for beauty and for nuts. It did turn out to be an attractive, suckering shrub that lit up fall with its boldly colored leaves. The nuts themselves were less notable: small and not very good tasting.

Next I planted a few old varieties of hybrid hazels, Graham, Gellatly, and Halls Giant, followed, a few years later by Tonda di Giffoni, Lewis, and Clark. All were billed as blight resistant and did quite well. In the 1960s eastern filbert blight made its way to the Pacific Northwest, the hotbed of commercial hazelnut production in the U.S. (providing 99 percent of domestic hazelnuts), which prompted breeding of resistant varieties. Lewis and Clark are two such varieties. Two more such varieties, Santiam and Yamhill, were added to my collection 11 years ago. 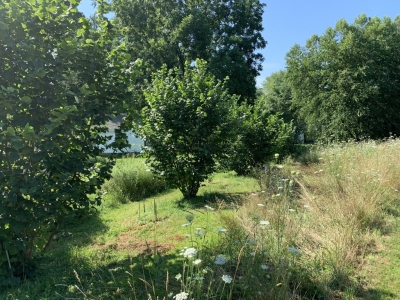 This doesn’t at all reflect poorly on breeders of these not-quite-resistant-enough hybrids. The blight fungus is capricious, changing with location and, perhaps, over time. I dug up and out all the nonproductive, diseased plants.

But I like filberts. Enter a few breeders breeding filberts right here in the northeast. One is Dr. Tom Molnar of Rutgers University, from whom I got a few selections (with nonluscious, early selection names like CR X R03P26 and CR X R11P07), which I planted back in 2014. And Jeff Zarnowski, of Z’s Nutty Ridge Nursery. And others. So now I grow Geneva (aka Gene, from Grimo Nut Nursery), Truxton, Dorris (another selection from Oregon), Raritan (a more advanced selection from Rutgers), as well as my original Rutgers plants.

I’m ready to cull again any varieties that catch blight or whose nuts are too small. For wherever plants are culled, I have potted plants of Monmouth, Hunterdon, and Somerset — all advanced Rutgers selections — waiting in the wings.

As with fruits in general, this year was also the best ever for nuts that I grow. Even the English walnuts (Juglans regia) bore a crop this year, their first substantial crop, all from 6 walnuts I planted back in 2006. I didn’t have high hopes for walnuts because they are susceptible to anthracnose disease, late frosts, and squirrels, which could conveniently harvest the nuts from the overhead squirrel highway along the road.

And the filberts — oodles of them. Mostly, we just shell and eat them. That’s fine. But for cooking with them or concocting a delicacy such as, say, fig-hazelnut jam, shelling nuts one at a time is too slow. 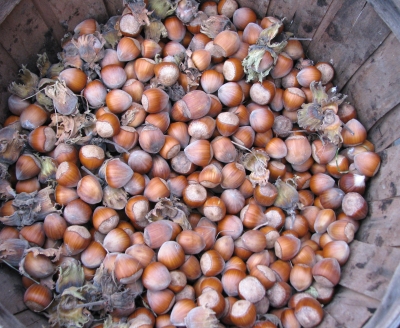 A quick web search turned up a couple of very elegant, home made shellers that work reasonably well. Luckily, before I delved too deeply in how I was going to fabricate one of these out of metal, I did a web search and found one available for about $30. 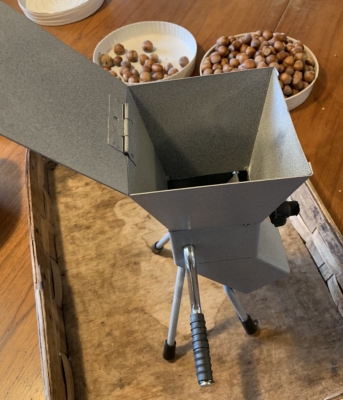 One problem with the sheller is that it needs adjustment for nut size, so it is recommended to do some sorting into size ranges before running nuts through the sheller. This I could make myself, easily. Basically, it is an open wooden box whose bottom has 3/8 inch square, wooden dowels spaced 5/8 inch apart, which is pretty much the size of my largest hazelnuts in the shell. The corners of the box are joined by hinges so that the sides can be moved to deform the shape. As the box deforms increasingly to a parallelogram, the distance between the dowels decreases. A pegged slat from one side of the box to n adjacent side holds the box to the desired shape and dowel spacing.

So I just adjust the box to the smallest dowel spacing needed, about 3/8 inch apart, dump on a bunch of nuts, and shake. Then I move the spacing up to about 1/2 inch, then shake again. And finally, move spacing to 5/8 inch, and . . .  well, you know.

I could be on my way to hazelnut butter, chopped hazelnuts sprinkled on everything, that fig-hazelnut jam, perhaps even home made Nutella. No rush. Once sufficiently dried (to 6 percent moisture, which takes a couple of weeks), hazelnuts store well in their shells for over year. Shelled and refrigerated, they keep for for about six months