It’s difficult to work outside in the garden these days, especially in early evening. No, not because of the heat. Not because of mosquitos either. The difficulty comes from the intoxicating aroma that wafts into the air each evening from the row of lilies just outside the east side of my vegetable garden. 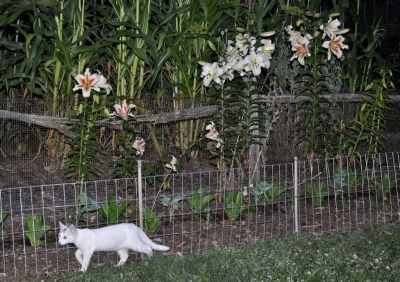 These aren’t daylilies, which are mildly and pleasantly fragrant. Wild, orange daylilies are common along roadways and yellow and hybrid daylilies, often yellow, are common in mall parking lots. (That’s not at all a dis’; the plants are tough and beautiful, and I’ve planted them also.) They’re also not tiger lilies, which lack aroma and sport downward turned, dark red speckled orange flowers with recurved petals.

My fragrant lilies are so-called oriental hybrid lilies, which are notable for their large flowers and strong fragrance. My favorite among those I grow is Casa Blanca. The flowers are large and lily white (what’d you expect?) except for the threadlike, pale green stamens emerging from their centers, with dark red anthers capping their ends.

Casa Blanca would be worth growing just for the look of the flowers; the fragrance, very sweet and very heady make this bulb a must-grow. Not for everyone, though. A few people dislike this fragrance. For some people it’s more than just stinkiness, the aroma causing nausea, dizziness, or congestion. 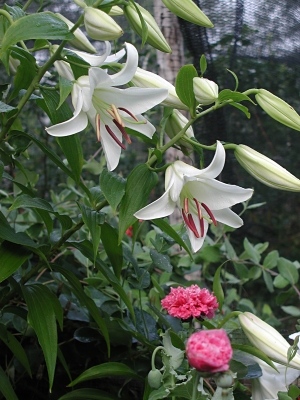 Casa Blanca’s stems can rise to about four feet tall, their upper portions circled with almost a dozen of those large blossoms in various stages of ripening. Some years, staked, persimmon orange, Sungold tomatoes grow in that bed, and the tomato and lily plants looked very pretty mingling together. (Tomatoes were, after all, once grown as ornamentals.)

This year I’m growing kale in that bed which, besides good eating, provides a frilly base from which the lily stems rise.

Turning to another of the senses . . . taste. Blueberries. They are among my most successful fruits and, as usual, the plants’ stems are bowing to the ground under a heavy load of berries this time of year. 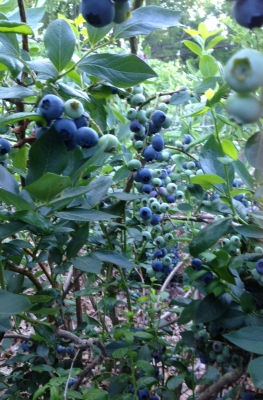 Not to brag, but the average yield of a blueberry bush is 3 to 5 quarts. My blueberry bible, Blueberry Culture (1966), states that “proper cultural practices can increase the yield to as much as 25 pints per bush.” I average about 18 pints per bush, with some bushes yielding as much as 24 pints. Organically grown, of course.

I credit my good yield to periodic additions of sulfur to maintain acidity of pH 4.0-5.5, timely watering with drip irrigation especially the plants’ first few years, topping up of existing wood chip, wood shavings, or leafy mulch each fall with an additional 3 inch depth of any organic, weed-free mulch, and pruning every spring. 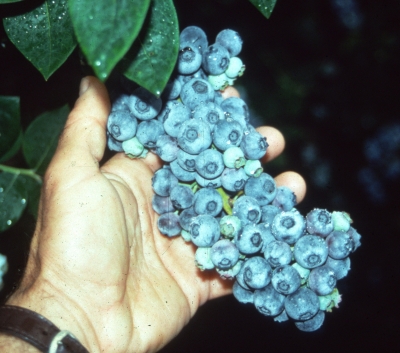 In year’s passed, I also added soybean meal for extra nitrogen to fuel stem growth. Blueberry flower buds develop along growing stems, with flowers open along those stems the following spring. More stem growth means more blueberries, to a point. For many years I have foregone soybean meal because the the plants were overly vigorous, creating a dense jungle that makes getting to the berries too difficult.

One other key to success and topnotch flavor is a net during the summer to fend off birds and — for best flavor — careful picking of only dead ripe fruits.

Water, Too Much or Too Little

So far, the growing season here in the Northeast has been one with both dry spells and wet spells, more than usual of each. Some recent thunderstorms fool many a gardener into thinking that the soil has been thoroughly wetted. But such rains are often only a drop in the bucket.

The only way to know for sure if enough rain has fallen for plants to really slurp up water is to check the soil or measure the actual amount of rainfall. A friend tells me he waters his plants every day. Every day! How much? It could be too much or too little, and probably is one or the other. I like to quantitate things so I measure rainfall or watering, as well as soil moisture, in a few different ways.

First, measuring water added to the soil: The ideal is about a 1 inch depth of water per week, which is equivalent to about a half a gallon per square foot of surface area. For hand watering a young tree, with an estimated root spread of only a couple of square feet, I fill the watering can with a gallon of water and sprinkle it on. 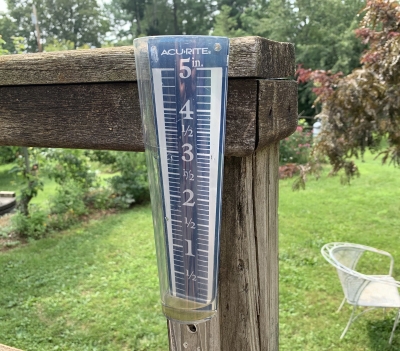 Rainfall, or the water from a sprinkler, could be measured with a straight-sided container. I use a rain gauge whose tapered body can break down the measurement into tenths of an inch, readable from indoors. 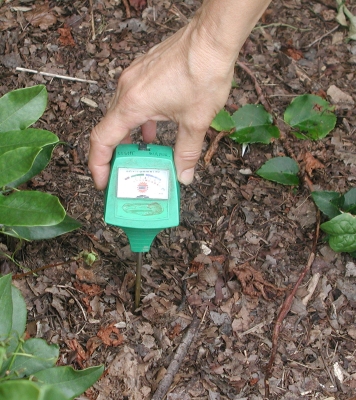 I usually measure the actual moisture in the soil with a handy little meter attached to a probe that slides a half a foot down into the soil. As expected, the meter told me today that the soil is very wet. Not surprising after 3 inches of rainfall, as measure in the rain gauge, two nights ago.

(There’s more about blueberries and water in my books Grow Fruit Naturally and The Ever Curious Gardener.)