After about twenty years of waiting, I happened to look at the ground and see a pine cone. The only pine tree nearby is a Korean pine (Pinus koreanensis) that I planted that many years ago, a tree that liked its new home and has soared, in that time, to fifty feet in height. My problem with the tree is that all it has done is grow; I planted the tree for its pine nuts.

A few years ago I did see a few cones way up near the top of the tree. Would the cones fall, carrying down the nuts, or would the nuts fall out, to be lost in the high grass? Would squirrels make all this moot?

I picked up the cone and clawed back its scales to see if any nuts were hiding within. Zut alors! Nuts! Most nuts need some curing before tasting good so I laid the cone in the sun for a few days. 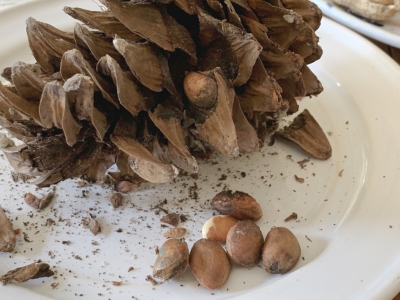 Tasting was next. First they needed to be cracked out of their shells, which was surprisingly easy with a pair of pliers. The first two nuts cracked were well filled and yielded delicious nuts. The next ten nuts, which comprised the rest of the harvest, when cracked, yielded nothing.

The pine nuts you see for sale are generally one of the piñon pines native to the Southwest, the pignolia native to Italy and other Mediterranean countries, or Chinese white pine (Pinus armandii). In fact, though, a number of pine species provide edible nuts.

One of my favorites, the Digger pine (P. sabiniana), yields nuts the size of lima beans and is native to the foothills of the Sierra Nevada mountains. Driving west down those mountains many years ago, I came to a screeching stop (well, not really screeching) upon seeing the giant cone of this tree on the ground. I picked it up and must have provided entertainment, perhaps elicited fear, in passerbys seeing some guy smashing open a pine cone on the guard rail.

My Korean pine is a dead ringer for our native white pine, the latter of which does not yield edible nuts. Korean pine is only one of a number of nut pines that grows well in cold winter climates, such as Zone 5 here in this part of New York’s Hudson Valley. Swiss Stone pine (P. cembra) and Siberian pine (P. sibirico) are also reliable nut-producers for cold climates, but are very slow growing.

Many other pine species potentially could produce pine nuts outside their native range, though their adaptability to very cold winters climate is not thoroughly tested. The closely related Colorado Pinyon (P. edulis) and Singleleaf Pinyon (P. monophylla) pines are bushy trees that become flat-topped with age. I planted a Singleleaf pine years ago and though it tolerated the cold winters here, it’s annual growth measured in inches. With the slow growth and lack of nuts, I eventually tired of it.

Over the years, my pinetum (yes, that is a word) has expanded. A Lacebark pine ((P. bungeana), after five years or so in the ground, has finally taken off and is growing over a foot a year. This species is especially worth growing also for its decorative bark, which is a patchwork of muted colors. 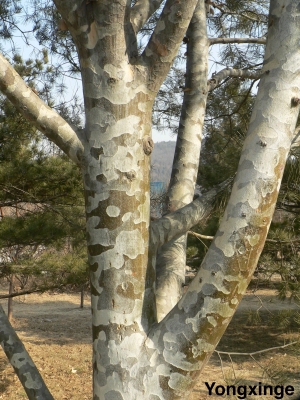 Back to the blank shells borne by my Korean pine. One possibility is that this pine needs cross-pollination from another tree of the same species to bear nuts or, at least, to bear them well. The cone that I found lying on the ground was pretty soggy and might have been lying there for a year or more. Perhaps nuts within dried up and/or rotted away. I subsequently found three more soggy cones, all devoid even of nut shells.

I recently planted pollinators for the pine. They’re small, but after a couple of years of nurturing are finally growing well, the largest of the two now two feet tall. I’ll report back, hopefully in less than 20 years. 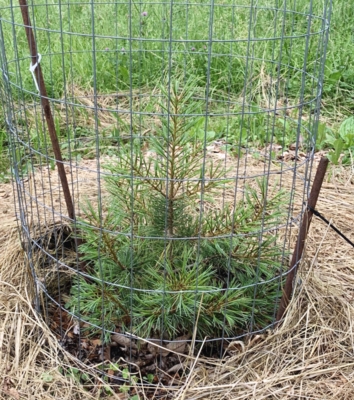 Survival of Fittest and Tastiest

On the bountiful side of the fruit and nut ledger this year are my tree fruits, especially the more common tree fruits. (Berries and uncommon tree fruits such as persimmon, mulberry, and cornelian cherry always do well here.) Winter and then spring weather were all  perfect for a good set of fruit. Once that usually fraught time in fruit growing was passed, Mother Nature took over and the trees naturally shed fruits that had been poorly pollinated or insect ridden. That lets a tree channel its energies into making bigger and more flavorful the fruits that remained hanging on branches. 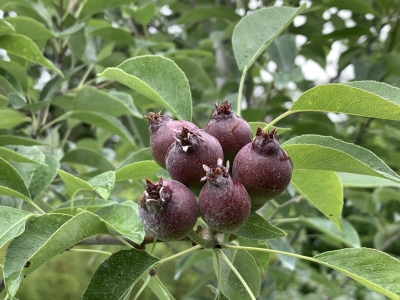 Nature’s aim in growing fruit is to make it appealing to all sorts of animals that incidentally spread the seeds as they eat the fruit. We humans are more discerning (would “finicky” be a better word?) when it comes to fruit quality. So once that natural fruit drop, “June drop” as it is appropriately called, is finished, we step in to remove even more fruit.

Pruning branches, on which some fruit would have been borne, in late winter and early spring already did some of that work. This week it was time to finish the job, by hand. This means putting some distance between each fruit and its neighbor, about five inches, always saving the largest and most pest free of the lot. Hand thinning would be tedious with smaller fruits, such as cherries and plums, so fortunately is unnecessary with them.

I ended up with a bucketful of cute apple and pear fruitlets. Cute, but into the compost they went where heat and time would cook any insect or disease pests lurking within that might have awakened to attack next year’s crop. 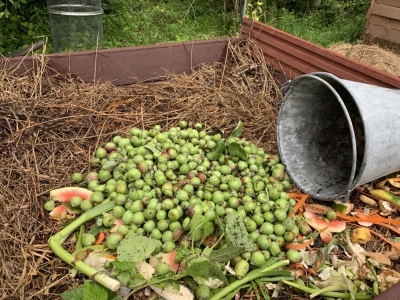