Start With The Carbs

A bit of chemistry might be good for your compost. Just a bit. Actually, we mostly need to deal with only two familiar elements of the 100 plus known ones. These two elements are carbon and nitrogen, and they are the ones for which the “bugs” that do the work of making compost are most hungry.

“Work” is too strong a word, though, because these composting bugs do nothing more than eat. Nonetheless, a balanced diet — one balanced mostly with respect to carbon and nitrogen — does these bugs, the composting microorganisms, good.

This time of year, the microorganisms’ smorgasbord is set with an especially wide array and abundance of carbon-rich foods. You can identify these foods because they are old plants or plant parts. As such, they are mostly brown and mostly dry. Autumn leaves, for example. Other carbon-rich foods include wood chips, straw, sawdust, hay, and even paper, made — after all — from wood pulp or other old, dry plant material. 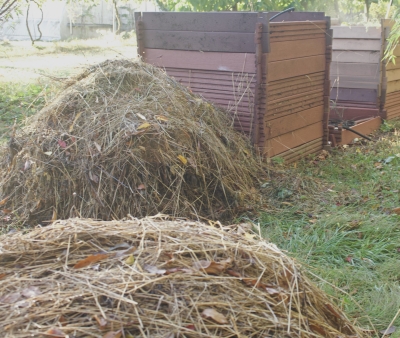 By far the bulk of high carbon — carbohydrate — foods for my compost organisms this time of year is hay that I scythe from odd corners here and there in my meadow. (Most of the meadow gets mowed by tractor once a year.) The hay is a mix of a wide variety of plants, mostly various species of grasses and goldenrods, but also, depending on where I cut, loosestrife, asters, New York ironweed, Joe Pye weed, and others. That varied mix is good for a compost pile; those microorganisms, like us, thrive on a varied diet which provides a slew of macro- and micronutrients which then end up in the finished compost and then my vegetables.

Just as we humans cannot live on bread and pasta alone (carbon-rich foods), so it is with composting microorganisms. So let’s now peruse the smorgasbord for some nitrogen-rich fare. This would include green stuff: young, succulent plants and plant parts. There’s not a whole lot of this stuff around this time of year, but there is some, including grass clippings, kitchen scraps, and microbial fare such as old, spent tomato, broccoli, pepper and other garden plants.

My scythed hay also provides some nitrogen-rich food — early in the season when its lush and green and only a foot or two high. But it has to be used in moderation because there’s not a whole lot of carbon-rich foods early in the season. Except that is, for the previous autumn’s fallen leaves and arborist wood chips that I stockpile. I also make some haystacks to save late-season hay for use in winter and early in the growing season.

When there’s insufficient nitrogen foods to balance out all the carbon foods you could now find for your compost, it’s time for dietary supplements. Nitrogen-rich supplements for the compost pile include manures and nitrogen fertilizers. Manures usually also add some carbon food, in the form of the straw, wood shavings, or whatever else the animal was bedded in.

No need to get out the chemistry set to analyze how rich a food is in carbon or nitrogen so that you can get them in exact balance (which, if you must know, is a ratio of 20:1). Just keep in mind that the younger the plant part, the richer it is in nitrogen. Also that rabbit manure is richer in nitrogen than is chicken manure, which is richer than, going down the line, sheep, horse, duck, cow, and, finally, pig manure. Nitrogen fertilizers are very concentrated sources of nitrogen.

If I need to supplement the compost diet with extra nitrogen, from fertilizer, I use something that acts organically in the soil, such as soybean meal, which is readily available from feed stores. Its nitrogen is released as various microorganisms feed on it.

Pile It In, and Monitor

So pile anything and everything that was once or is living into your compost bin, balancing carbon-rich foods with nitrogen-rich ones. After garden and backyard cleanup is finished for the season, the scale tips the other way as vegetable scraps become the most significant additions to your compost pile. Balance the food value of this nitrogen-rich material with an occasional cover of wood chips or hay from a pile you keep handy next to your compost bin.

The most important thing in making compost is a good bin. A “good” bin will keep scavengers at bay, be a barrier to weed seeds that might waft into the finished compost, is convenient to fill and empty, and maintains moisture and warmth within. It also keeps everything neat, looking like a compost pile rather than a garbage pile.

If you want to see how you’re doing as a compost “bug” dietician, monitor the goings on within your pile with a long-probed thermometer and your nose. If the materials are moist and outdoor temperatures not frigid, the well-fed pile will be decidedly warm — 120 degrees F., or more. Lack of heat reflects an excess of carbon-rich foods or insufficient water; odors are the result of excess nitrogen or too much water. 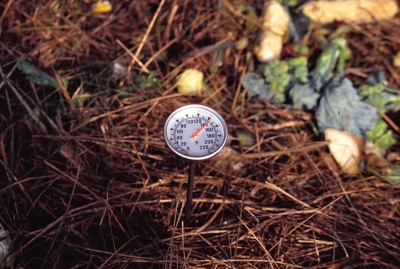 I take care of my pile’s water needs in two ways. First, when I build the pile I add materials of various texture so that the mix drains well — but not too well so that it can’t cling to sufficient moisture. A lot of water is needed to really wet the innards of pile. Add a lot of material to a compost pile at one sitting and you’d have to stand there, hose in hand, for a long time to really wet it. I’m not that patient, so the second way I take care of the pile’s watering needs is to hook up a small, static sprinkler to a hose along with a valve for adjusting the width of the spray to only cover the top of the pile. About 20 minutes of watering does the trick. (I periodically check moisture deep within the pile with a long-probed moisture meter.)

Keeping records of what you add to your compost pile and how it responds helps you remember what you did right and wrong. But “wrong” is too strong a word, because the material you put in your compost bin

will always turn to compost. As my bumper sticker reads, “COMPOST HAPPENS,” even if the process takes longer or becomes “aromatic” along the way.

For me, making and spreading compost is as rewarding and enjoyable as is gardening per se.

(For more about making compost, using it most effectively, and buying compost, see my book Weedless Gardening.) 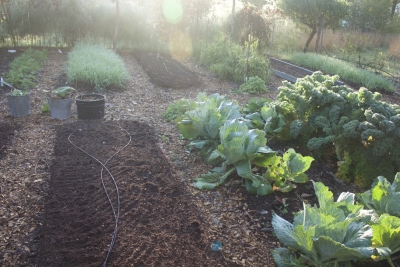