For the past week or so I’ve been getting parts of the garden ready for next year. Too soon, you say? No, says I. 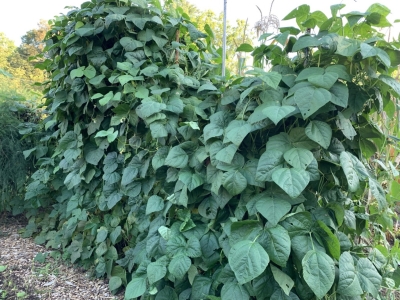 A bed of corn and a bed of bush beans are finished for the season. Not that that’s the end of either vegetable. I planted four beds of corn, each two weeks after the previous, and the two remaining beds will be providing ears of fresh Golden Bantam — a hundred year old variety with rich, corny flavor — well into September.

The bed of bush beans will be superseded by a bed of pole beans, planted at the same time. Bush beans start bearing early but peter out after a couple of harvests. Pole beans are slower to get going, but once they do, they keep up a quickening pace until slowed, then stopped, by cold weather.

Why, you may ask, ready those beds now for eight months hence? One reason is that the garden is always such a flurry of activity in spring that I welcome one less thing that needs doing then. Also, part of garden preparation is thorough weeding (which I also keep up with, though less thoroughly, all season long). Any weeds checked now means less weed seed to spread around the garden and, in the case of perennial weeds, less opportunity to gain a foothold.

And later in the season… 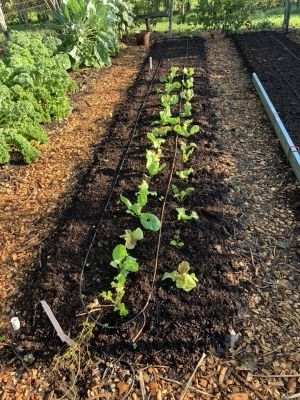 And, later in the season

And beds prepared now need not sit idle till spring. Right after getting the old bean bed ready for spring, I’ll plant it with vegetables that thrive in the cool weather of fall, vegetables such as lettuce, endive, turnips, Chinese cabbage, and winter radishes. The bed will be ready as soon as fall vegetables are harvested and out of the way.

No magic potions or secret techniques ready my beds now for next year. What’s needed, besides weeding and fertilizing, is to maintain or increase levels of soil organic matter. Organic matter is integral to good fertility, maintaining a diverse population of beneficial soil microbes, and improving soil aeration and moisture retention. It’s what put the “organic” into organic gardening.

The way I provide all this can be summed up in one word: compost.

Okay, there is more to it. My vegetable garden is laid out in beds that are 3 feet wide with 18 inch wide paths between them (and a 5 foot wide path up the middle of the garden for rolling in cartfuls of compost). Soil in the beds has not been tilled or otherwise unduly disturbed for decades, which has many benefits that I delve into in my book Weedless Gardening.

First step in getting the garden ready for next year is to remove all existing plants, be they corn, bean, or weed plants. I excise most plants, including weeds, by grabbing each near its base and giving it a slight twist to sever it from its fine roots, which are left in place. Coaxing with my Hori-Hori knife is sometimes needed. Corn plants definitely need coaxing, which I do by digging straight down around the base of each plant and then giving it a yank. After all this, I smooth out the ground, if necessary, with the tines of a rake or pitchfork.

A one inch depth of finished compost should provide all that intensively grown vegetables require for a whole season. That one inch of compost is laid down like a rich icing right on top of the bed. Finished! 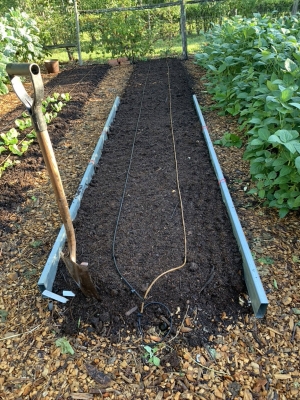 Okay, there’s sometimes a little more to it. I noticed weak growth in one of the later corn beds, possibly due to nitrogen deficiency, although untimely, temporary malfunction of my drip irrigation system at a critical growth stage for the corn is another possibility. Just too make sure, I will sprinkle some organic nitrogen fertilizer (soybean meal) in that bed when I prepare it.

Okay, there’s sometimes even a little more to my soil prep. If a bed is finished for the season and I have enough cleared beds for all the cool season vegetables, I could just prepare the bed, as above, and that would be the end of the story. But I don’t like to look at bare ground, so beds cleared and prepared early enough in the season, which is about the end of September here in Zone 5, get planted with a cover crop. Cover crops protect soil from wind and water erosion, latch onto nutrients that would otherwise leach down and out of the ground, and crumble the soil to a fine tilth with their roots. And going into winter, I’d rather look at a lush, green cover crop than bare ground. 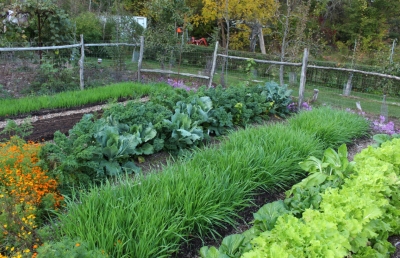 My usual cover crop of choice is oats or barley. Both thrive in autumn’s cool, moist weather. They mesh well with no-till because they winterkill here in Zone 5.

This year, especially for my beds of corn, which is a nitrogen-hungry plant, I’ll mix crimson clover in with the oats or barley. As a legume, the clover will enrich the ground with extra nitrogen that it extracts from the air. And the vivid crimson flower heads, sitting atop stalks like lolliopops, will look nice. 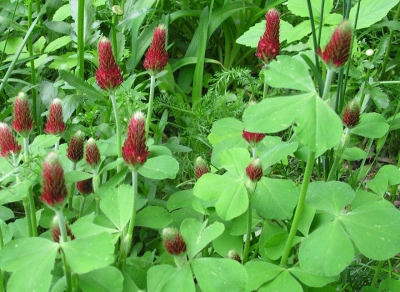