Many Benefits of Drip

I’m a big fan of drip irrigation, an irrigation system by which water is frequently, but slowly, applied to the soil. It’s better for plants because soil moisture is replenished closer to the rate at which they drink it up. With a sprinkler, soil moisture levels vacillate between feast and famine.

Because of the efficient use of water, drip is also better for the environment, typically using 60 percent less water than sprinkling. 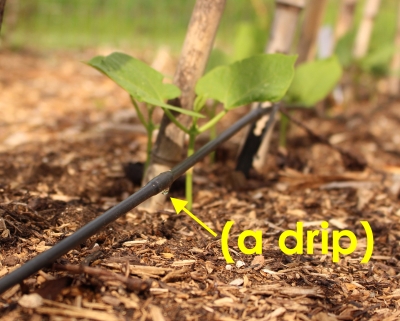 And drip is better for me — and you, if your garden or farmden is dripped. By pinpointing water to garden plants, large spaces between plants stay dry so there’s less weeds for us to pull. And best of all, with an inexpensive timer at the hose spigot, I turn on the system in April and then pretty much forget about watering until the end of the growing season.

Today I was reminded about the “pretty much” part of being able to forget about watering until the end of the season. My drip system is set up so that same main line that quenches plant thirst in my two vegetable gardens continues on to water about twenty potted plants. Or not! 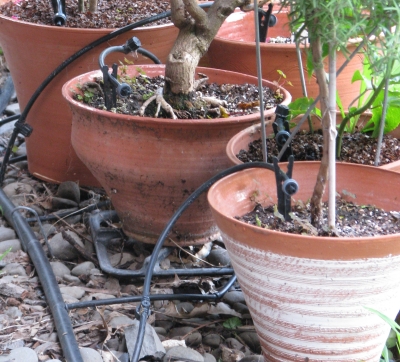 I noticed yesterday that some of the potted plants were dry and assumed that the emitters bringing water to these pots were defective. Turns out that sometimes they dripped and sometimes they didn’t. Hmmm. I kept switching around and replacing the “defective” emitters and by the end of the day, for some reason, they were all working. Problem solved.

No! I have a hose connected near my well pump so that I can occasionally hand water some melons I’ve planted in a truckload of leaves a local landscaper provided me with last autumn. Water pressure was very low.

Long story short is that the seasonal line from the well to the pump has a short section of flexible, almost clear plastic tubing. Sun shining on the tubing grew a nice crop of algae within. I disconnected the tube and was able to remove an almost intact tube of algae that had been clogging the line. That was the culprit responsible for the capricious behavior of the drip system and the sluggish behavior of the hose for hand watering.

Thorough cleaning and reconnecting the tubing, wrapping it in aluminum foil to exclude light, priming the pump, and cleaning the sediment filter in the drip line had everything working waterly again. Geez, you gotta be a rocket science to keep things working smoothly. Well, not quite.

I’ve now marked my calendar to check the drip system every 3 weeks.

In addition to checking periodically to make sure that the water flows unobstructed, my watering system — any drip system —  requires other regular attention, including a small amount of hand watering. The reason has to do with the shape of the wetting front drip presents in the soil. As a drip of water enters the ground, gravity pulls water downward at the same time that capillary action is pulling the water horizontally.  Down in the ground, that wetting front is shaped like an ice cream cone, at first widening with depth and then narrowing to a point.

The width of the cone depends on soil porosity. Clay soils have small particles with commensurately small pores (illustration from my book Weedless Gardening). 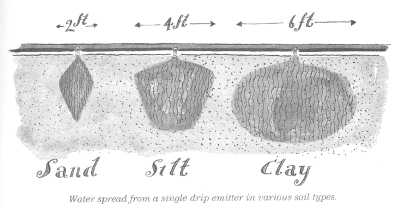 Those small pores exert a strong capillary pull so the ice cream cone spreads wide, as much a six feet at its widest down from each point source of water. At the other extreme is a sandy soil, whose large particles have large spaces between them and comparatively little capillary pull; the result is a slender ice cream cone, spreading no more that a couple of feet wide.

A drip system is a series of emitters, so the wetting fronts can merge together at their widest points presenting a wetting front that in soil cross section looks like waves below ground, with peaks at ground level at each emitter. (This illustration is also from Weedless Gardening.)

Between emitter peaks, the ground is dry near the surface. Plant a seed there and, in the absence of rain, the seed will just sit. Tuck a transplant into the soil there and, in the absence of rain, it will dry out and die. Hand watering gets that seed or transplant’s roots growing; once the roots reach down far enough to tap into the wetting front, they’re on their own. 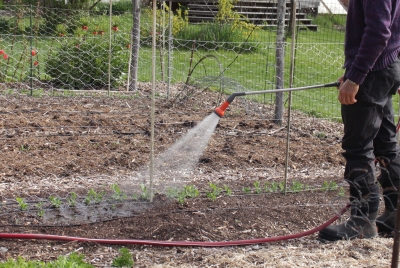 To avoid hand watering I sometimes move the drip line right over the row where I planted seeds or right along the row where I set transplants. After a few days or once seeds sprout, I move the drip line back to its rightful position which, along with one other line, is about 9 inches in from each of the outer edges of my 3 foot wide vegetable beds.

Only one more maintenance item for my drip system. If it has rained cats and dogs, that is, more than 1 inch, as measured in a rain gauge, I might turn off the drip system temporarily. Then — and this is very important — I’ll stick a Post-It note  on which is written “Drip” to my bathroom mirror as a reminder to turn the drip system back on in due time. Drip irrigation is low maintenance, but not no maintenance.