For many gardeners, spring is the critical gardening season, what with preparing the soil, starting seedlings, setting out transplants, pruning, watching and staying prepared for late frosts and . . .  In my view, right now is just as crucial, and for an equal number of reasons.

True, a 90 degree day with high humidity doesn’t exactly pull you out to the garden to putter around in blazing sunlight. But early mornings around here are mostly cool, calm, and beautiful.

Much of what needs to be done is regular maintenance. Pruning tomatoes, for instance. 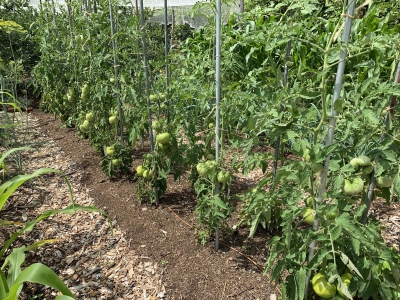 I train my tomato plants to stakes and single stems, which allows me to set plants only 18 inches apart and harvest lots of fruit by utilizing the third dimension: up. At least weekly, I snap (if early morning, when shoots are turgid) or prune (later in the day, when shoots are flaccid) off all suckers and tie the main stems to their metal conduit supports.

Espalier is the training of trees to two dimensions whereby the tracery of the stems is as decorative a plant feature as are the leaves, flowers, and/or fruits. To maintain that tracery of branches, my espaliered Asian pears need frequent pruning. 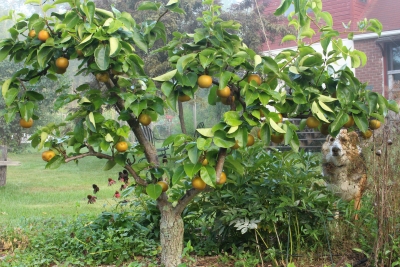 I lop wayward shoots either right back to their origin or, in hope of their forming “spurs” on which will hang future fruits, back to the whorl of leaves near the bases of the shoots.

The response of the pear trees depends on the weather, which is unpredictable. Dry sunny weather is conducive to spurs. Rainy weather coaxes, instead, new shoots pop out right where I cut back old shoots. I think.

Whether or not the weather is dry, rampant growing plants quickly suck the soil dry. So I also keep attentive to watering this time of year. The vegetable garden and potted plants are the neediest in this respect; fortunately, they demand little from me to do because a timer turns its drip irrigation system on and off automatically. All I have to do is to periodically check to make sure drippers are all dripping.

Newly planted trees and shrubs are another story. This first year, while their roots are spreading out in the ground, is critical for them. I make a list of these plants each spring and then water them weekly by hand all summer long unless the skies do the job for me (as measured in a rain gauge because what seems like a heavy rainfall often has dropped surprisingly little water).

A one-inch depth of water is needed to wet a soil about a half a foot deep. I provide this with 3/4 gallon of water per estimated square foot spread of the roots.

Sowing seeds and setting out transplants isn’t only a spring gardening activity. Tomatoes, peppers, eggplants, cucumbers, and other summer vegetables peter out during the shorter, cooler days of late summer and early fall. But there are plenty of vegetables that enjoy growing conditions that time of year.

Some of the fall vegetables need to be sown now to be large enough to mature in fall. No need to provide space for them by digging out tomatoes, peppers, or any other summer vegetables. I sow endive, kale, lettuce, Chinese cabbage, and, if I could stomach it, cauliflower seeds in midsummer in seed flats. Once they sprout I “prick them out” into individual cells of automatic watering GrowEase trays for later transplanting. 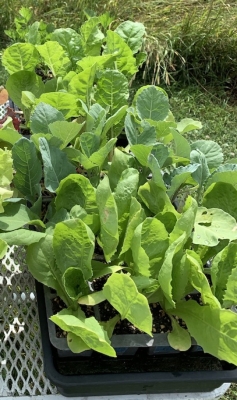 Not only vegetables get this treatment. Buy a packet of seeds of delphinium, pinks, or some other perennial, sow them now, overwinter them in a cool place with good light, or a cold (but not too cold) place with very little light, and the result is enough plants for a sweeping field of blue or pink next year. Sown in the spring, they won’t bloom until their second season even though they’ll need lots of space that whole first season.

Cuttings are another way to propagate plants this time of year. Early this morning, when cells were plump with water, I made cuttings of hardy kiwifruit and begonia.

Weeds can make all this pruning, watering, and seeding for naught. Clear ground is needed in which to eventually set my cabbage and kale transplants. Weeds stealing water and nutrients, even sunlight, won’t let plants grow at their best. They’ll also promote disease by preventing free flow of air; fungi fester under damp conditions. 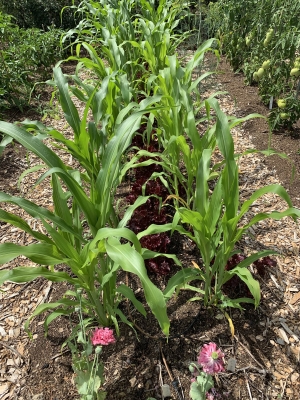 Every time I look at a weed, I’m thinking how it’s either sending roots further afield underground or is flowering (or will flower) to scatter its seed. Much of gardening isn’t about the here and now, so I also weed now for less weeds next season. It’s worth it.