When to Plant & Whether to Plant, Corn & Garlic

Into the ground goes the stinking rose. That’s garlic. As a matter of fact, by the time you read this my garlic cloves will have been in the ground for awhile, since the beginning of the month, already sending roots out into the soft earth.

Planting garlic this early is sacrilege in most garlic circles. But it may make sense.

Garlic needs a period of cool weather, with temperatures in the 40s, to develop heads. Without that cool period, a planted clove merely grows larger, without multiplying. Which is why it’s planted in fall. Spring-planted garlic might still get sufficiently chilled or needs to be artificially chilled, but yields are generally are lower than fall-planted garlic.

Lower yields could also be because the cloves, planted in spring, must put energy into growing both leaves and roots. Roots grow whenever soil temperatures are above 40 degrees F., so fall-planted cloves start growing roots immediately. And for quite a while because, with the ground cooling more slowly than the air, balmy weather lingers long in the soil in fall, especially when it’s covered with an insulating layer of wood chips, compost, straw, or other organic mulch.

My reasoning for late summer planting rather than fall planting is that the sooner the bulbs are in the ground, the more time roots have to grow before temperatures drop consistently below 40 degrees. More root growth now means more roots to fuel leaf growth in spring which, in turn, means bigger heads to harvest next summer. More root growth also means that cloves are more firmly anchored into the ground through winter, so are less likely to heave up and out of the ground as it freezes and thaws.

The caution against planting as early as I suggest is that leaves might awaken and push up through the ground in fall, only to be snuffed out by winter cold. True. But garlic is a monocotyledenous plant, so its growing point, like that of other “monocots” (such as lilies, onions, grasses, orchids, and bananas), lies beneath the ground, protected from cold. The usual recommendation for garlic planting is to plant early enough to allow time for some root growth but late enough so leaves don’t appear aboveground.

Leaves peering above ground in fall might even help spur root growth, at least once they start exporting energy. (Their initial growth is fueled by energy reserves in the planted clove.) Even if winter cold kills the leaves, they will have done some good if they begin growth soon enough. The sloppy mess of frozen leaves could, admittedly, breed unwelcome bacteria or fungi.

Biological systems are complex, and plants don’t read what I write and may not follow my reasoning. Just to check, I planted only half of my garlic bed; I’ll plant the other half in a month, the recommended planting time. Next summer I’ll know if my garlic cloves followed my reasoning.

Garlic is for the future; sweet corn is for the present. Whoever it was — and there were plenty of those “whoevers” — that recommended against growing sweet corn in a small garden because it wasn’t worth the space did a disservice to gardeners. My garden isn’t all that big yet we’ve been harvesting all the sweet corn we can eat and freeze since early August and will continue to do so for much of this month. 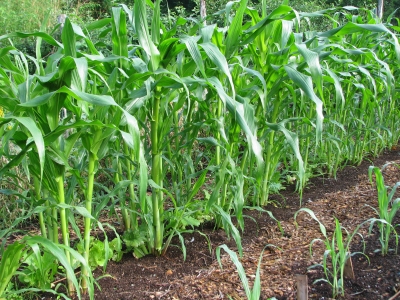 Sweet corn can share a bed with other vegetables, lettuce here.

My vegetable garden is in 18 foot long, 3 foot wide beds, and I planted 4 beds at two week intervals from early May until the third week in June. I sowed the seeds sown in hills (clumps) to end up with 3 to 4 plants every two feet in a double row running down each bed. Planting in hills provides better pollination and resistance to wind than planting rows of single, more closely spaced plants.

Each stalk yields one or two ears, so a conservative 1.5 ears per stalk and 3 plants per hill computes to yields of 81 ears of corn from each of four beds. That’s a lot of sweet corn! And not just any sweet corn, but Golden Bantam Sweet corn, the standard of excellence in sweet corn a hundred years ago. You can’t buy ears of this variety these days. It’s the only one I grow.

Pumping out all those delectable ears requires good growing conditions. To whit: Very fertile, well drained soil; water as needed; and little competition from weeds. I slathered the beds with an inch or more of compost in spring and all summer plants’ thirst has been daily and automatically quenched with drip irrigation.

I didn’t even have to devote those beds to only sweet corn for the whole season. Earliest plantings were preceded and are followed by quickly maturing vegetables such as lettuce, spinach, and radishes. Turnips, winter radishes, and bush beans are other possibilities to follow harvest of those first sowings of sweet corn. A row of carrots and beets was sown

Delectable Golden Bantam, a hit since 1906

up the middle of the second planting shortly after the corn emerged and is doing fine now that the corn has been harvested and those plants cleared away. I’m still trying to figure out what to plant to follow the third planting, which is just finishing up.

I also grow popcorn, but that’s another, also delectable story.

A corn bed, a few weeks after harvest & cleanup