Looking out on my vegetable garden last week, I noticed some yellowing leaves on kale transplants. Perhaps the yellowing leaves were just a legacy from the kale transplants adjustment to their home outdoors. In the greenhouse, lettuce that I planted last month lacked its expected exuberance.  Perhaps slow growth of lettuce was my imagination.
Or perhaps the lettuces and kales needed some fertilizer. Vegetables are generally heavy feeders, and leafy vegetables especially so. My garden doesn’t get fertilizer per se; the plants get all they need from compost. Years ago I calculated that a one inch depth of fully ripened compost could thoroughly satisfy the nutritional needs of vegetable plants — even intensively planted vegetables — for a year, and that’s what my plants get. As an added benefit, compost, in contrast to chemical fertilizers and even most organic fertilizers, offers a wide spectrum of nutrients in addition to just the big three: nitrogen, phosphorous, and potassium.
Chemical fertilizers are salts (in the broad sense of the word, that is, any ionic compound and not only sodium chloride). Add them to the soil, and they are there for plant use. Not so for compost and most other organic fertilizers. To become food for plants, the latter must first be “mineralized,” that is, converted by soil microorganisms to ions.
Microorganisms grow more and more active with increasing heat and moisture (to a point), so perhaps my plants were hungry because cold or dry soil was keeping microorganisms sluggish. And any available nutrients, whether their provenance is chemical or organic, needs to be dissolved in water before a plant can slurp them up.
“April showers bring May flowers . . . “ blah, blah blah. Not so, at least in my observation the past few years. Aprils have tended to be dry. Dry soil slows plant growth and could be responsible for my kales’ yellow leaves. Mineralization is slowed and even if mineralized, insufficient moisture might be available to put those nutrients in solution.
A problem with slow mineralization could have been resolved by applying compost the previous fall. Lingering warmth in the soil permits some mineralization, and nutrients would be ready and waiting come spring (with a winter’s worth of water putting them in solution). Usually I apply compost in fall but last fall did not get to all the beds. 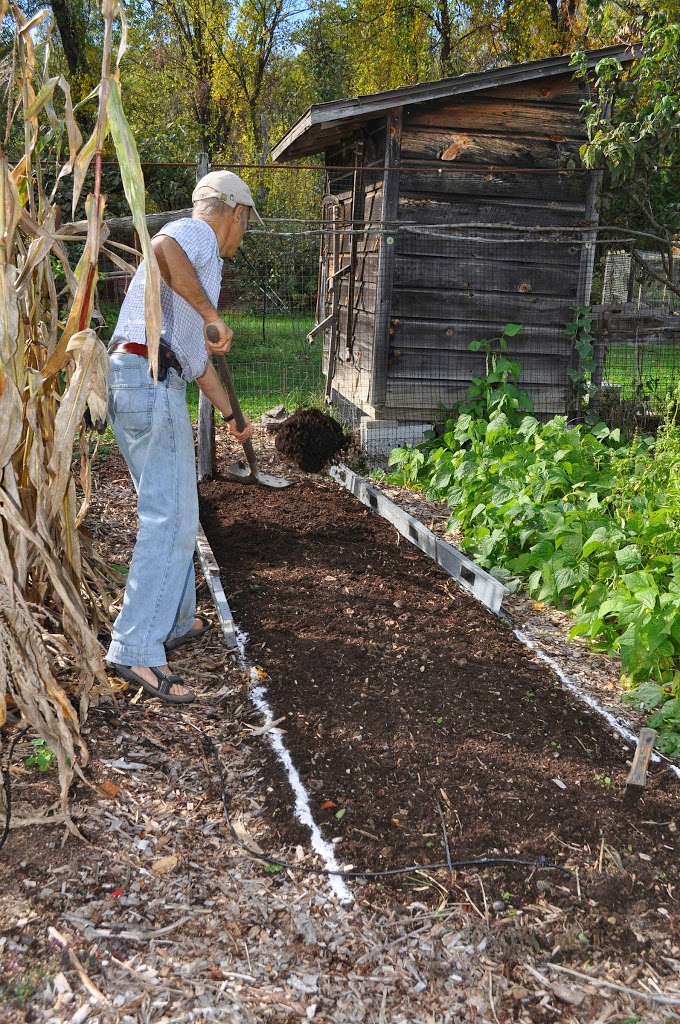 The problem has been resolved, simply, by watering. As supporting evidence, the drip line in one of the vegetable beds came loose from its source; kale in that bed remained sickly even as the watered beds sprung to life.
—————————————————-
For a quicker effect or where compost is not available, a concentrated organic fertilizer, such as soybean meal, might be in order. You might have guessed that soybean meal is high in nitrogen — 7 percent — since soybean seeds contain 40 percent protein and proteins are about 16 percent nitrogen.
More recently, I’ve also been using alfalfa meal as a source of concentrated, organic nitrogen for plants or beds that need it. Being a legume, alfalfa is also high in nitrogen, but the meal is made by grinding up leaves and stems rather than seeds, so it is less concentrated in nitrogen (2 percent) than soybean meal. Alfalfa is a deep-rooted perennial whose roots forage far and wide for nutrients to possibly offer a bigger smorgasbord to plants than does soybean meal. Alfalfa meal also contains triacontanol, a natural compound that stimulates plant growth (not that I’m necessarily looking for any artificial stimulation fro my plants, whether from sources natural or otherwise).
Both soybean meal and alfalfa meal are mostly used as animal feeds; as such, they are readily available at feed stores.
Neither soybean meal nor alfalfa meal is the end-all for fertilizing plants. A serious concern with both is that they are mostly grown from GMO seeds. Also, neither provides a sufficiently broad spectrum of nutrients. Soybean meal provides mostly nitrogen and potassium; alfalfa meal mostly nitrogen and phosphorus. And finally, neither provides bulk that comes from carbohydrate compounds. This bulk has far-reaching benefits, fluffing up soils for aerations, sponging up water, feeding beneficial microorganisms, and, in addition to providing nutrients, making nutrients already in the soil more available to plants. Compost, leaves, and straw are among the organic materials that offer bulk.
—————————————————-
Why the focus on nitrogen when talking about fertility? Nitrogen is the most evanescent of the big three nutrients, and the one most likely to need annual replenishment. Nitrogen can leave the soil as a gas, can be washed down and out of the soil by rainfall, and can be taken up by plants. A soil regularly “fertilized” with bulky organic materials will have plenty of all necessary nutrients but could be temporarily short of nitrogen. Unless that bulky organic material is fully ripened compost. Yay compost!