UPCOMING WORKSHOPS WITH LEE:
Hawthorne Valley Farm, Ghent, NY, 9/9, http://hawthornevalleyfarm.org/event/grow-fruit-naturally-workshop, Grow Fruit Naturally
Stone Barns, Pocantico Hills, NY, 9/22,  http://www.stonebarnscenter.org/products/backyard-fruit-for-small-gardens.html, Fruits for Small Gardens
————————————————————————————-
One of the things I like least about gardening is its deferred gratification. I planted a Beurée d’Amanlis pear tree a couple of years ago and don’t expect to sink my teeth into one of its fruits until next year. I planted Indian Summer rudbeckia seeds a couple of weeks ago so that I can enjoy swaths of orange-tinged, yellow blossoms this time next year. Yesterday I transplanted endive seedlings, from seeds sown back in early July, into a garden bed to provide succulent, green leaves for salads, soups, and stews beginning this October.

Not that deferred gratification is all that bad. After all, except for when I began my first garden many decades ago (Madison, Wisconsin on August 1st, and I did reap some beans and tomatoes), all the while that I’m planning for the future I am reaping other rewards of past efforts. This week for instance, I’ve harvested onions, seeds of which I sprinkled into furrows in a seed flat in a cool greenhouse back in February. I’m also enjoying tomatoes of all stripes, the result of seeds planted in early April. And I see a reasonable crop of Magness, the best-tasting of all my pears, getting ready with their final stages of ripening for harvest in a few weeks.

Now that I think of it, though, I do enjoy sowing seeds, planting trees, and other gardening activities that are ostensibly for some future reward. Not to mention the pleasure of watching and coaxing along plants as they develop, everything from a radish seedling, sown last week, to a maple seedling, planted 15 years ago and now about 20 feet high.
I’m reminded of a name I saw on a sign hanging over the entrance to a primitive cabin in the woods of Maine: Quitchyerbitchin. It was not a native American name.
—————————————– 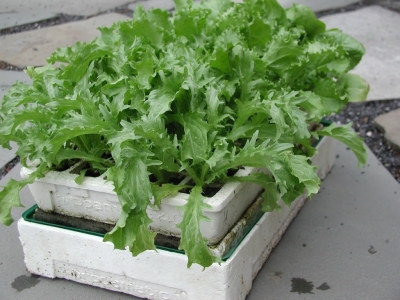 There’s a flurry of deferred gratification in process: planting vegetables for the autumn garden. It’s like a whole new garden, one that begins around mid-September and continues, even here in hardiness Zone 5, into December.
In between each of the above-mentioned endive seedlings went lettuce plants. Like the endive, the lettuce was sown in a seed flat about a month ago so, like the endive, required no garden space until it became available. That space was donated by my first planting of Golden Bantam sweet corn, sown out in the garden the first week of May and now either eaten or steamed, sliced from cobs, cooled, and packed away in the freezer. The lettuce will be harvested and out of the way by the time the heads of endive  start to spread and fill the bed solid with greenery.
How about another bed, this one just cleared of onions? Into that bed I just planted a row of turnips and a row of Black Spanish winter radishes. You might snicker at my heaping praise upon the lowly turnip, but if you’ve ever had them sown in late summer, grown quickly, and picked during the cool days of autumn, you’re in for a real treat, roasted, stewed, or sliced raw. Hakurei is one of the best for flavor; I also like the old Purple Top White Globe.

Conditions that bring out the best in turnips also do so for winter radishes, the pumped up counterparts of small spring radishes that offer the same spicy flavor but also can be stored through winter. You have to be careful not to plant winter radishes too early or they grow frighteningly large. One summer I did just that with a long, white variety of daikon radish. Very long, it turns out, given enough time. The radishes grew to look like baseball bats, their upper portions rising up out of the soil as if there was not enough room underground to house them. The experience sort of killed my taste for winter radishes for a while.
Just this morning, another batch of seeds — Chinese cabbage and cilantro — went into seed flats. Like winter radishes, Chinese cabbage should not be sown too early in summer, in this case because long days and hot weather cause the plants to make flower stalks instead of fleshy leaves. Tatsoi and Fun Jen, the two varieties I planted, each need about 45 days from seed to maturity, but no reason to rush harvest during the cool, short days of autumn. The plants just sit there waiting to be eaten.
—————————————–
Besides suitable soil fertility, the main requirement of all these autumn vegetables is water. Fast, succulent growth brings out the best in them. With drip irrigation, I don’t have to worry about watering established plants. But until their roots can forage out into wetting front a few inches below the surface, new transplants and seeds need regular watering from a watering can or hose.
You or I might be tempted to also quench our own thirst with water from that hose. In general, don’t! Consumer Reports magazine recently reported that some hoses can leach lead  (used to stabilize polyvinyl chloride in hoses) into the water at 10 to 100 times the level allowable by the EPA for drinking water. The workaround is, if you’re buying a new hose, to buy one specifically labelled safe for drinking water, to let the water run before taking a drink, or — best idea — walk to your kitchen to slake your thirst.