My vision became blurred with dollar signs as I looked out the car window at mile after mile of bittersweet (Celastrus scandens) clambering over trees along a stretch of parkway. That was a few years ago, as I was driving away from a visit to New York City. While there, I had wandered into a florists’ shop, where I had been stunned by the price for a few sprigs of bittersweet. A quick mental calculation as I gazed out the car window told me there was gold in them thar’ trees. 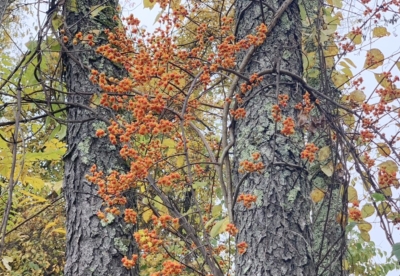 My financial empire crumbled before it even had a chance to grow. In some states, bittersweet is a protected plant. Anyone harvesting a protected plant from private property without the landowner’s permission may be subject to a fine.

To look at bittersweet, you might very well mistake it for a weed. The plant is a rampant, fast-growing vine. Given support, it will climb skyward twenty feet or more. Bittersweet can engulf small trees and shrubs, even kill them by twining around, then strangling them.

And bittersweet isn’t found in restricted ecological niches over a small geographic area. The plant grows wild in thickets and along roadsides over an area bounded by southeastern Canada across to the Dakotas, south to Texas, and then back across to North Carolina.

Whether looked upon as a weed or as a plant worthy of protection, bittersweet is in its glory now. Neither the leaves nor the flowers (long, whitish panicles in June) are noteworthy. Most seasons the plant is all the more inconspicuous because of its habit of getting lost in a tangle of other wild shrubs and small trees.

But now, as the thin, yellow or orange coating of each fruit flares open to contrast and expose the three-lobed, orange capsule within, bittersweet suddenly comes into focus. 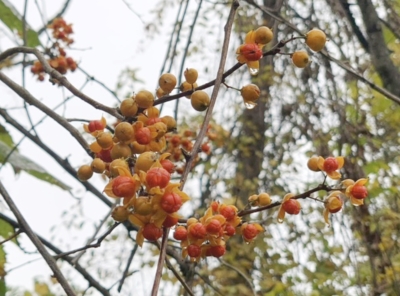 The bright fruits will last well into winter, cheering up the grays and browns of that season, and sparkling against white snow. Indoors, the fruits add color to dried flower arrangements. (The fruit is poisonous, so take precautions with toddlers in the home.)

I now am content to admire and pick just a few sprigs from the bittersweet vines I have found growing along the abandoned railroad bed behind my property. But any other gardener who chooses to plant bittersweet must know something about sex. Bittersweet is regarded as polygamodioecious or dioecious. The first botanical mouthful means that each plant has some flowers with male and female parts and some flowers that are partly female or male. Dioecious means that individual plants are either male or female. Only female flowers produce fruit, and to do so they must be pollinated by a male. (In practical terms, this means plant two vines and hope.)

Anyone who has seen bittersweet run wild can correctly surmise that the plant is not finicky as to site. Full sun or part shade is suitable, though plants bear fruit more profusely in full sun. Soil can be rich or poor. Poor soil and some pruning helps keep plants in bounds. And aesthetically, a rampant plant like bittersweet is at home in the same habitat it invades in the wild: rambling over banks and rough stone walls, and up old trees.

Not too long after the collapse of my envisioned financial empire followed by an appreciation of bittersweet’s autumn beauty, a dark cloud floated into view. It turns out that most, perhaps all, of the wild bittersweet I see is the unprotected Chinese bittersweet (also known as Asian bittersweet and botanically as C. orbiculatus). It’s more than just unprotected, having escaped from cultivation and now running rampant throughout the eastern part of the U.S..

Both the native and introduced species are very similar in appearance, but still easily distinguished. The easiest ways to tell them apart is when in fruit: Fruits and flowers develop all along stems, and fruits have a yellow covering in the Chinese species; the American species develops its fruit only at the tips of stems, and fruit have an orange covering. 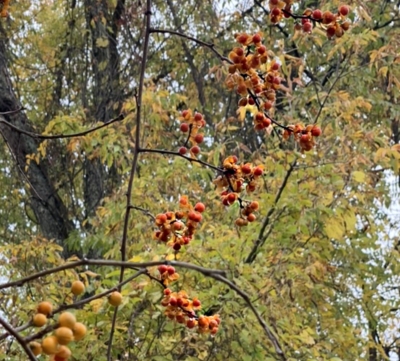 Those identifiers are not a slam dunk because only females bear fruits and the two species can hybridize.

Chinese bittersweet is listed as an invasive plant. I can attest to this characterization by just looking towards the woods to the west of my meadow. The vines are gamboling beneath tall trees, some of them latching onto other vines or trees small enough to wrap around and begin a skyward journey. As those small vines twine, they thicken and can kill their host tree.

Eradication isn’t easy. I had to clear an encroaching section of plants. My weapons were hand shears, loppers, and pruning saw. Some of the vine sections I cut were four inches in diameter. The fat, sinuous vines were ominous, but pretty. 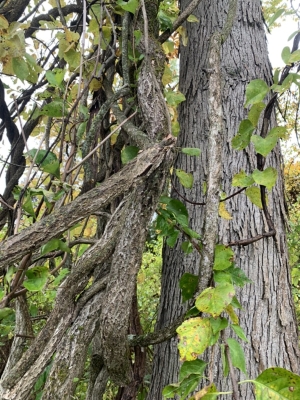