A few weeks ago, one or more of the few species of “cabbageworms” began munching the leaves of my cabbage and Brussels sprouts plants. They ignored kale leaves, thankfully, because it’s my favorite of the three. 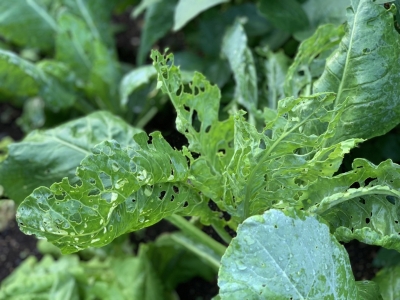 A laissez fair approach would have left the cabbages and Brussels sprouts mere skeletons, so I had to take some sort of action.

For the record, “cabbageworms” are actually not worms, but a few species of caterpillars all classified — and this is important — in the order Lepidoptera. Here’s the lineup: A cabbage looper arches its back when moving, and is light green with a pale white stripe along each of its sides and two thin white stripes down its back. 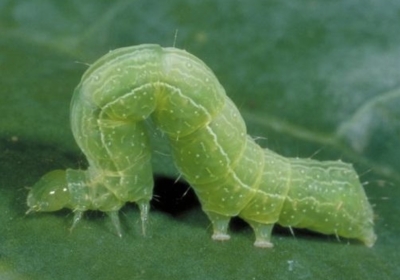 A diamondback moth larvae is 5/16 inch long, yellowish-green, and spindle shaped with a forked tail. 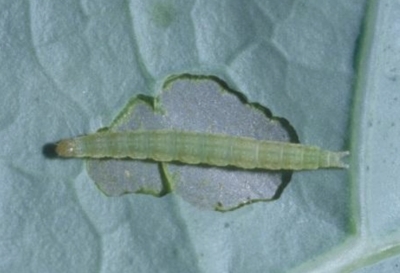 A cabbageworm (yes, one kind of cabbageworm is named “cabbageworm”) is one-and-a-quarter inches long, velvety green, and has a narrow, light yellow stripe down the middle of its back. 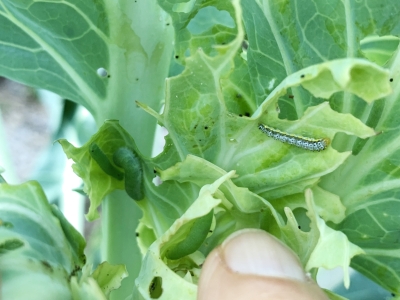 A cross-striped cabbageworm is 3/4 inch long and bluish-gray in color with many black stripes running cross-wise on its back, below which a black and yellow stripe runs along the length of its body.

I put an end to whichever “worms” were the culprits, and was able to do so without resorting to any chemical spray, by spraying the plants with Bt. Bt is the commonly used abbreviation for Bacillus thuringiensis, a bacterium that causes disease in certain insects. After ingesting Bt, a cabbageworm becomes sick, stops eating, and dies. Since the Bt I sprayed is toxic only to lepidopterous insects, it doesn’t pose any danger to other creatures, such as birds, cats, dogs, humans, and even other insects.

The insecticidal properties of Bt have been known since early in the twentieth century, when the bacterium was discovered as a silkworm pest by Japanese researchers. (Silkworms are also Lepidoptera.) The originally discovered strain of this bacteria is toxic only to caterpillars, which are larvae of butterflies and moths, and was first used purposefully to control the European corn borer in Europe in the 1930s. Interest in Bt waned in the late 1940s, when nerve gases used during World War II led to the development of new types of chemical pesticides. In the 1960s, agricultural scientists finally began to take a second look at Bt.

Many strains of Bt have been isolated. The ones for cabbageworms and other Lepidoptera are  Bt aizawai and Bt kurstaki. 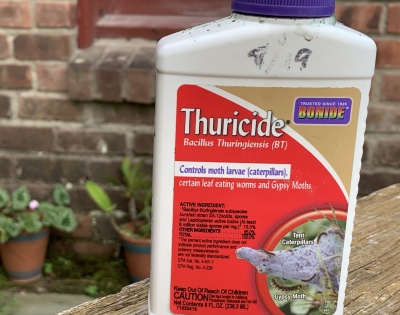 All these strains of Bt are available commercially. The bacteria are packaged in a dormant condition either as a dry powder, a liquid suspension, or, in the case of Bt var. israelensis, a slow release ring that is floated on water to kill mosquito larvae. Bt goes under a number of brand names which don’t give a hint of the pesticide’s ingredients, so read the label to make sure of what you are buying. The product I use goes under the trade name Thuricide.

Bt is a living organism, so I store it in such a way as to prolong its viability. (Here on the farmden, Bt resides in the back of the refrigerator, which is generally a strong no-no for pesticides. (But Bt is nontoxic, and there are no children in the house.) Kept cool and dry, the bacteria will remain viable in its container for two or three years. Bt works quickly enough so I can check for discolored, blackened, or shriveled larvae the next day to see if the spray is still viable.

Is there some trade-off that must be made when using this apparently benign pesticide? Yes, insect pests can develop resistance to Bt, just as they do to chemical pesticides. Resistance is most likely from continuous, repetitive use of any single pesticide, or different ones with the same mode of action.

This problem, with Bt, has been exacerbated since almost 500 million acres of crops, mostly field corn and cotton, have been genetically engineered with insecticidal Bt genes. It’s equivalent to the field being constantly sprayed with Bt. Some resistance has been found.

In my garden, I apply Bt at the recommended rate, only to afflicted plants, and only when a pest problem gets sufficiently out of hand to warrant treatment.

There’s another good reason for careful use of at least the original strain of Bt. Since this strain is toxic to caterpillars, indiscriminate use could substantially decrease the caterpillar population and, hence, the numbers of moths and butterflies. My distaste for the celeryworm, which has a voracious appetite for carrot, celery, and parsley leaves, is tempered by the beauty of its adult form. 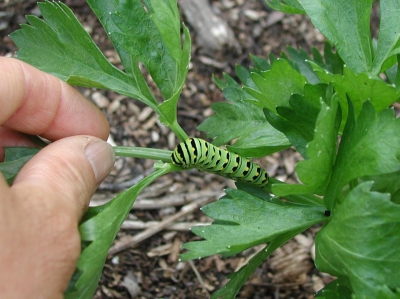 Surely the elegance and grace of the adult form, the black swallowtail butterfly fluttering about the garden, adds as much beauty as a marigold or rose.