Note 1: I have some plants leftover from this past weekend’s  plant sale here at the farmden. Contact me by June 24, 2022 if you’re interested in purchasing to pick up any white currant, black currant, fig, or gooseberry plants (a number of varieties of the latter two).They’re all discounted at 25% off.

I’ve been playing around with the orientation of some of my trees’ branches to influence how they grow. Branches pointed skyward generally are inherently vigorous, giving rise to long shoots, especially from their topmost buds. At the other extreme are branches oriented horizontally. They’re generally weak-growing, and tend to produce fruit buds rather than vigorous shoots and leaves. The cool thing is that if you or I change branch orientation, it changes the growth and fruiting habit of that branch.

Bending and tying branches is a good way to balance shoot growth and fruiting, especially of apple and pear trees. Both types of growth are needed. The fruits for us to eat, and the shoots to “feed” the fruit and to provide places on which to hang the fruits. Shoot growth is also needed to periodically replace old wood. 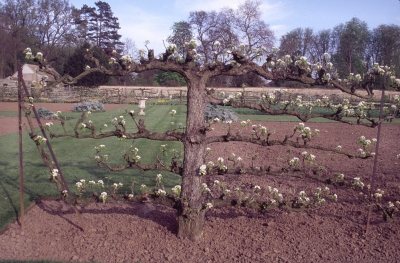 Branch bending to regulate growth and fruiting is especially evident with an espalier, which is a tree grown in an orderly, usually two dimensional form. Lurking behind the many forms, fanciful and otherwise, for espaliers is an appreciation for their effects on growth and fruiting.

Backyard apple and pear trees commonly put too much of their energy into shoot growth, a problem that can be exacerbated by overly enthusiastic pruning and over-fertilization. One way to coax an overly vigorous tree into bearing is by pulling upright branches downward, affixing them in that direction. This may seem an unnatural way to treat a plant, but it does help a tree to get started fruiting. Once fruiting begins, the weight of the fruit will keep branches down. 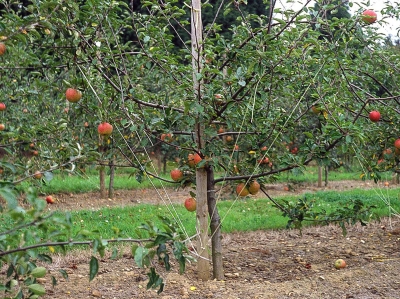 Sometimes fruit pulls a branch down so much that it’s too fruitful and needs invigoration. Asian pears are prone to bearing too heavily too early in their life, especially if grafted on dwarfing rootstocks; the result is a stunted tree. The cure is to drastically cut drooping branches back to more upward growing — and, hence, vigorous — side shoots. Or to stake branches into more upright positions.

Bending down branches spreads them, which, along with correct pruning, also lets all branches bathe in sunlight. With many upright growing branches, the interior of a tree becomes too shaded to produce fruit buds or even leaves. 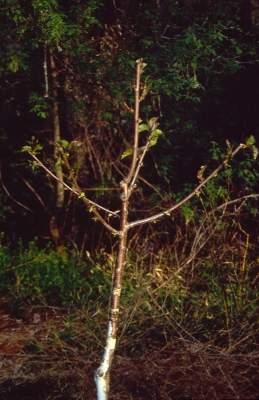 Branches that are spread at an early age make wide angles with the trunk. That wide angle attachment becomes a strong juncture, one that will not break when eventually weighted down with fruit, as often occurs with branches having narrow crotch angles.

Practical Matters: How to Do It

On very young trees which are still forming their main branches around the trunk, I start spreading the new shoots when they are just a few inches long. After bending a shoot carefully so as not to break it, I hold it in that position by snapping a spring-type clothespin on the trunk with the tail of the clothespin holding the shoot down. 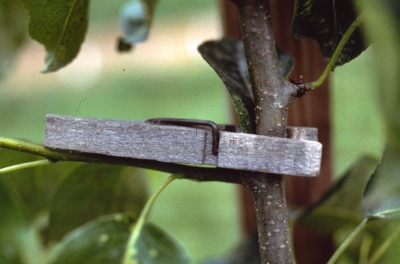 Another way to hold this wide angle is to press one end of a toothpick into the shoot and the other into the trunk, just enough to keep the toothpick in place.

For older branches, I use either a stiff wire or a length of wood with a brad driven in each end. (I’ve previously removed the brad’s head and sharpened what remains.) 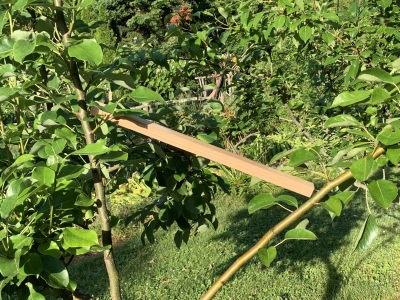 Tying a string around a branch, and then to a weight on the ground or to the tree’s trunk is another way to pull a branch down. Or, you can affix a weight right to the branch. For instance, glue a clothespin to a rock, then clip it to the branch. 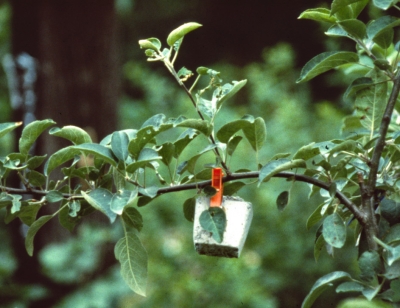 After a few weeks, the ties or weights or clothespins can be removed. The branches will stay in place.

Ideally, re-orienting the branches of apple and pear trees achieves a favorable balance between shoots and fruits. To this end, strive for about a sixty degree angle to the trunk. I try to keep the branch straight as it is oriented to this angle. If the branch has a bow in it when pulled down, overly vigorous shoots are apt to grow from buds at the topmost part of the bow.

Don’t expect immediate payback for all this care and effort. A year or more might elapse before an apple or a pear tree forms fruit buds, and fruit buds form fruit buds the season prior to actual fruit production. It’s worth the effort in the long term.