Dinosaurs and Snake Eggs, and More

Most benefits of compost are well-known: it takes out your “garbage,” it fertilizes your plants, it’s teeming with beneficial microorganisms, yadda, yadda, yadda. One too often overlooked plus for compost is the thrill of discovery, discovery of things other than compost in the pile.

Discovery might range from the mundane to the sublime. Among the mundane discoveries is that glint of a lost kitchen fork as it emerges from within the chocolatey pile. Same for the favorite vegetable peeler or the lost stainless steel coffee strainer.

More towards the sublime end of the spectrum would be the dinosaur that surfaced as I was turning a pile a few years ago. A dinosaur! Yes, a small, plastic one that got there from who knows where.

More seriously sublime was the clutch of about three dozen soft, white eggs about the size of quail eggs that came into view as my pitchfork lifted a clump of compost for turning into the adjacent compost bin. Turns out they were snake eggs, those of a black rat snake.

I put a few of those snake eggs into a terrarium along with some compost to see if they would hatch. For the uninitiated (me), it’s an eerie sight to see such a traditionally maligned creature emerge from such a welcome, traditional symbol of springtime rebirth. Baby black rat snakes are not black. Instead, bands of dark and light gray run across their backs. 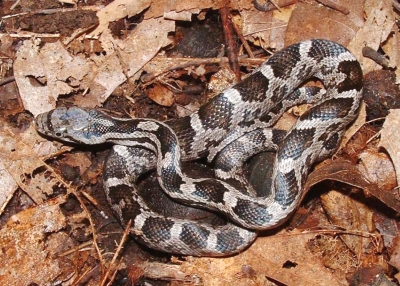 Another time, while turning my compost pile, I accidentally disturbed a mating pair of black rat snakes in flagrante delicto.

Ducks and Grubs, and More

White grubs occasionally turn up in my pile, but a couple of days ago, one of my piles was home to at least two dozen of the C-shaped, creamy white grubs resting within. 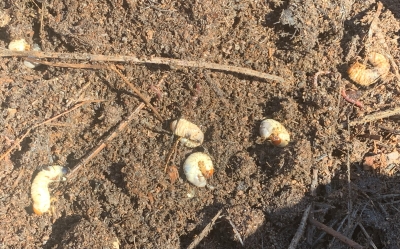 On the chance that they were grubs of Japanese beetles, I started picking them out and yelling “Quack, quack.” No, I hadn’t lost my mind; I was calling the ducks over for a treat of beetle grubs. They dashed for each tossed grub as it hit the ground.

And then a mouse, disturbed in my compost turning, made a dash out of the bin and across the lawn. A mouse in a compost bin is not that surprising, although the construction of my bins and my two dogs are pretty good at keeping mice at bay. (I make efforts to limit mouse populations because they can spread diseases such as hantavirus, salmonella, and lymphocytic choriomeningitis.)

One of the ducks took a break from grub hunting to grab the mouse which, judging from the chase the other ducks gave the lucky duck, is more of a gourmet duck food than even the grubs. Soon only the mouse’s tail was hanging out the duck’s beak, and then the mouse was down the gullet. Here’s a video I took of the Duck eating mouse

But Does Compost Really Need Turning?

You might wonder: What’s with all this compost turning? Each of my compost bins holds a half to three-quarters of a ton of compost, each pile gets turned once, and I have a number of piles. Is it worth all that  work?

Turning a compost pile lets me see how the process is chugging along. I keep a record of when a pile was built, and then months later, when it’s turned, how far along it is to being ready to use. After I turn a pile a make a guesstimate of percent decomposition, which is accurate enough for me to know about when it will be ready for spreading.

Turning a pile also lets me get a look at the compost-to-be and then to make any adjustments that might be necessary. I’ll lightly hose down every few inches of turned material, enough to make the ingredients glisten. Anything looking exceptionally dry gets extra water. Occasionally, part of the pile is too wet. I fluff it up as I flip it over into the adjacent bin. Parts of the pile might be compressed into a dense mat. Throwing it into the adjacent bin might be enough to loosen it up; if not, I pick at it with the tines of the pitchfork. 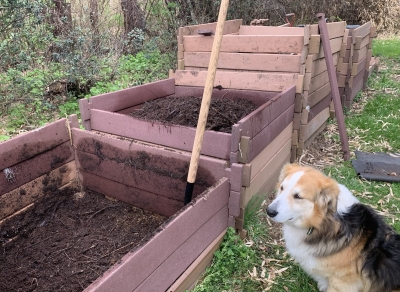 Turning the pile also mixes up the ingredients more than when the pile was built. Each part of the pile, then, gets new neighbors in the form of new ingredients and new microorganisms.