A Sharp Knife is not Enough

“Prune when the knife is sharp” goes the old saying. Wrong! (But don’t ever prune if the knife—or shears—is not sharp.) There are best times for pruning, and they depend more on the type of plant and the mode of training than on the sharpness of the knife. 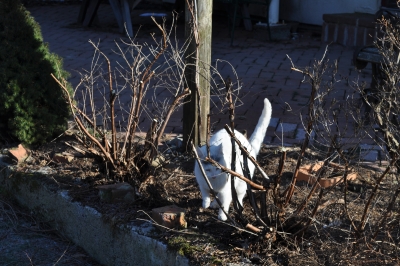 Cat is ready to prune

As each growing season draws to a close in temperate climates, trees, shrubs, and vines lay away a certain amount of food in their above- and below-ground parts. This food keeps the plants alive through winter, when they can’t use sunlight to make food because of lack of leaves (on deciduous plants) or cold temperatures. This stored food also fuels the growth of the following season’s new shoots and leaves, which, as they mature, start manufacturing their own food and pumping the excess back into the plant for use in the coming winter.

A similar situation exists in some tropical and subtropical climates having alternating wet and dry, or cool and warm, seasons. Plants must wait out those quiet times drawing on their reserves.

When you prune a dormant plant, you remove buds that would have grown into shoots or flowers. Because pruning reapportions a plant’s food reserves amongst fewer buds, the fewer remaining shoots that grow each get more “to eat” than they otherwise would have and thus grow with increased vigor.

(For more details on above and what follows, see my book, The Pruning Book, available from the usual sources or directly from me, signed, at www.leereich.com.)

Summer or Winter, Growing or Dormant?

As the growing season progresses, response to pruning changes, because shoots of woody plants cease to draw on reserves and stems stop growing longer well before leaves fall in autumn. In fact, growth commonly screeches to a halt by midsummer. So the later in the growing season that you prune, the less inclined a woody plant is to regrow — the year of pruning, at least.

Traditional theory holds that summer pruning is more dwarfing than dormant pruning, but contemporary research puts this theory on shaky footing. True, if you shorten a stem while it is dormant — in February, for example — buds that remain will begin to grow into shoots by March and April, while if you cut back a shoot in midsummer, the plant might just sit tight, unresponsive. Ah, but what about the following spring? That’s when the summer-pruned shoot, according to this recent research, waits to respond. (Plants have an amazing capacity to act however they please no matter what we do to them.)

What are the practical implications of all this? First of all, if you want to coax buds along a stem to telescope out into shoots, prune that stem when it’s dormant.

On the other hand, summer is the time to remove a stem to let light in among the branches (to color up ripening apples or peaches, for example), or to remove a stem that is vigorous and in the wrong place. Watersprouts, which are vigorous, vertical shoots, are less likely to regrow if snapped off before they become woody at their bases.

Pear, before and after summer pruning detail

Unfortunately, the response to summer pruning depends on the condition of the plant as well as the weather. A weak plant may be killed by summer pruning. A late summer wet spell, especially if it follows weeks of dry weather, might awaken buds that without pruning would have stayed dormant until the following spring. Also factor just how much growth you lop off a stem as well as temperatures in the days or weeks following pruning.

Regrowth and flowering are the dramatic responses to pruning; you also must consider plant health when deciding when to prune. Although immediate regrowth rarely occurs after late summer or autumn pruning, cells right at the cut are stirred into activity to close off the wound. Active cells are liable to be injured by cold weather, which is a reason to avoid pruning in late summer or autumn except in climates with mild winters or with plants that are very hardy to cold.

Dormant pruning just before growth begins leaves a wound exposed for the minimum amount of time before healing begins. Some plants — peach and its relatives, for example — are so susceptible to infections at wounds that they are best pruned while in blossom. On the other hand, the correct time to prune a diseased or damaged branch is whenever you notice it.

Also consider your own health (your equanimity and your energy) when timing your pruning. Depending on the number of plants you have to prune, as well as other commitments, you may not be able to prune all your plants at each one’s optimum moment. I prune my gooseberries in autumn (they never suffer winter damage), my apples just after the most bitter winter cold has reliably move on, and my plums (a peach relative) while they are blossoming.

Sap oozes profusely from cut surfaces of maples, birches, grapes, and kiwis if they are pruned just as their buds are plumping up in spring. The way to avoid this loss of sap is to prune either in winter, when the plants are fully dormant, or in spring, after growth is underway. The sap loss actually does no harm to the plants, so rushing or delaying pruning on this account is not for your plant’s health, but so that you can rest easy.