A shrub is a shrubby, woody plant. (Now, that’s profound.) Numerous stems originating at or near ground level are what make a plant shrubby. Usually, no one stem ever gets the upper hand over other stems. For most shrubs, you need to get out there with your pruners to snip and lop every year.

How to prune a shrub depends on when it flowers and on what age stems provide the most ornamental effect. Does the shrub flower early in the spring, or later in the summer? Does it flower on old stems, on those that grew last year, or on new shoots? 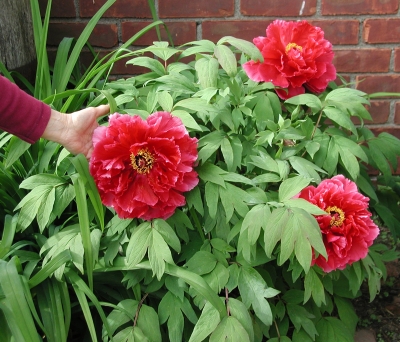 And one more thing before we dive in: Here, I’m writing about pruning shrubs growing informally. Let’s shelve pruning hedges and, because they vary so much in their pruning needs, roses for another time.

Deciduous shrubs can be put into one of four categories according to the age of stems that flower or otherwise look their best. Here are some bare-bone guidelines for each of these categories. In my book, The Pruning Book, from which this is excerpted, I offer more detailed guidance with extensive lists of plants in each category (and, of course, details on pruning hedges, roses, and just about any other plant or pruning technique you can think of. Really.)

Deciduous shrubs whose old wood flowers or looks best. Included within this category are shrubs — witch hazel, rose-of-sharon, tee peony are examples — that naturally build up a permanent framework of branches. Rarely do they send up new suckers at or near ground level. These shrubs flower directly on older wood, or from shoots that grow from older wood. 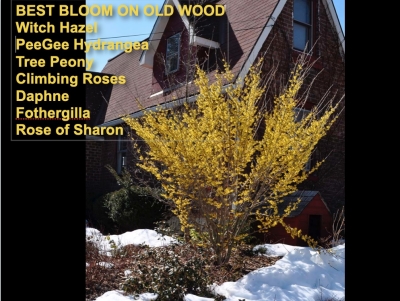 Grouping plants always entails a certain degree of arbitrariness, and because of their disinclination to sucker, a few plants in this category could also be considered “trees,” especially if deliberately trained to one or a few trunks..

These shrubs are the easiest shrubs to prune: mostly, just don’t!

Deciduous shrubs that flower best on one-year-old wood. Because they all flower only on wood that grew the previous season, annual pruning is needed to stimulate new growth, each year, for the following year’s flowers.

Renewal prune each year, removing the very oldest stems to make way for younger, floriferous stems to step in and replace older stems. Cutting a few stems low in the shrubs is also less work than shearing, and creates a more graceful, fountain-like growth habit, and keeps the plant low, neat, and abundantly flowering.

Prune those shrubs that flower early in the season right after their blossoms fade. But now, or just before growth begins, is the time to prune those shrubs that flower from summer onward. Pruning early-flowering shrubs right after they bloom allows you to enjoy their blossoms, but still leaves enough time for shoots to grow and ripen wood sufficiently for next season’s blooms.

The one-year-old shoots on which flowers are borne may grow mainly from older stems up in the shrub, or else mostly from ground level. The location of these flowering shoots determines pruning technique, so I have subdivided this category into two groups, grouped plants accordingly, and follow with instructions for each.

Shrubs such as lilac, forsythia, and mock orange flower best on one-year-old wood originating from older wood up in the plant. 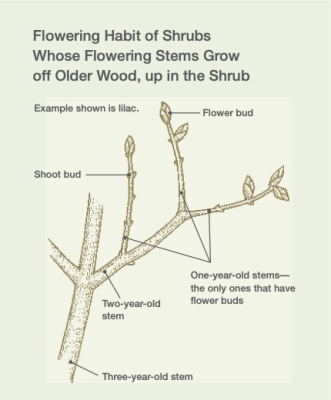 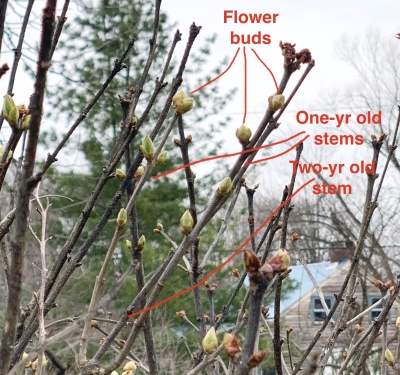 Peer in at the base of the mature plant and you’ll notice wood of various ages growing up from ground level. Begin pruning by cutting away near ground level, some of the very oldest stems. Those oldest stems are also the tallest ones, so these first cuts quickly lower the plant. Each year also remove at ground level a portion of the youngest stems so they don’t crowd with age.

Abelia and kerria are among those shrubs that flower best on one-year-old wood originating at ground level; they need more drastic pruning. Every year cut away all wood more than one-year-old, either right to ground level or else to a vigorous branch originating low on the plant. You can tell the age of a stem by its thickness and, with many plants, by the color or texture of the bark. 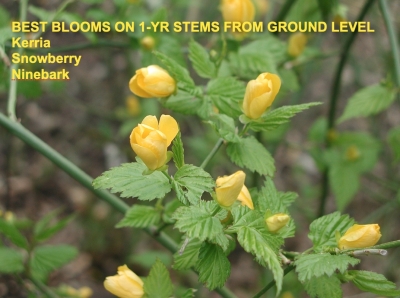 Deciduous shrubs whose current growth flowers or looks best: Here we have shrubs valued only for their new growth. And yes, in some cases we value the plant for the young stems themselves. 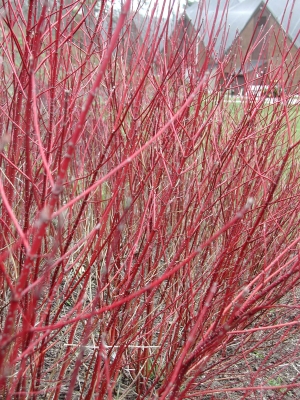 This group of shrubs, which includes red-osier dogwood (whose young, red stems “ignite” with winter cold), butterfly bush, New Jersey tea, and Hills-of-Snow hydrangea, is very easy to prune: simply lop the whole plant down to the ground just as buds are swelling. 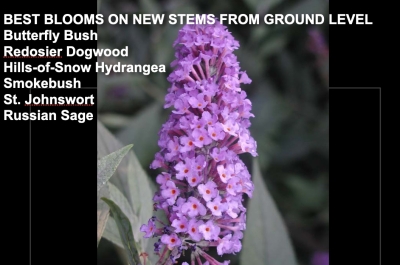 You perhaps have inherited, with your property, a neglected, old shrub offering you a tangled mass of stems, an awkward posture, and few flowers. Can this shrub be brought back to its former glory? Probably.

You have two options in renovating this shrub. The first is the drastic one: you merely lop the whole plant to within one foot of the ground just before growth begins for the season. The plant won’t be pretty for a few years but after that you’re on your way to a “new,” shrub, full of blossoms and with a graceful growth habit, a whole new plant from the ground up.

A second option is gradual renovation, removing a couple of the oldest stems each year over a period of four or five years. Although this takes more time, the plant will look decent throughout the recovery period.

Rather than renovation, you might instead consider capitalizing on your overgrown shrub’s age and venerability by transforming the plant into a picturesque small tree. Not all shrubs make this transition gracefully; devil’s walkingstick, hawthorn, and hazelnut are among those that do.

Even easier is to let the deer prune for you, in which case the bottom of the crown will be as high as the deer care to reach. 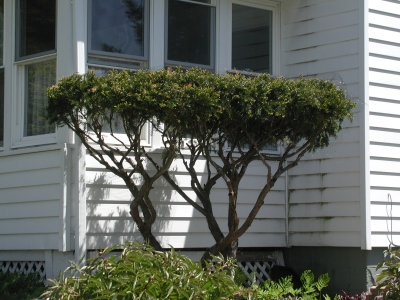