Prime Ingredients for Any Potting Mix

Many years, my gardening season begins on my garage floor. That’s where I mix the potting soil that will nourish seedlings for the upcoming season’s garden and replace worn out soil around the roots of houseplants. Why do I make potting soil? Why does one bake bread?

There is no magic to making potting soil. When I first began gardening, I combed through book after book for direction, and ended up with a mind-boggling number of recipes. The air cleared when I realized what was needed in a potting soil, and what ingredients could fulfill these needs. A good potting soil needs to be able to hold plants up, to drain well but also be able to hold water, and to be able to feed plants. The key ingredients in my potting mix are: garden soil for fertility and bulk; perlite for drainage; and a mix of peat moss and compost for water retention. 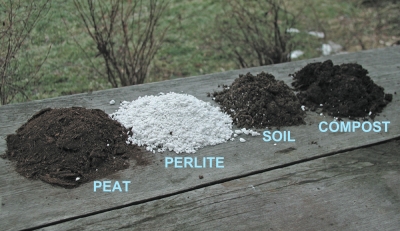 Why not just dig up some good garden soil? Because a flower pot or whatever container a plant is growing in unavoidably creates “perched water table” at its bottom. Garden soil, even good garden soil, is so dense that it will wick too much water up from that perched water table. Waterlogging is apt to result, and waterlogged soil lacks air, which roots need in order to function. (More about perched water tables and lots of other stuff about soil, propagation, plant stresses, and more can be found in my book The Ever Curious Gardener: Using a Little Natural Science for a Much Better Garden.) 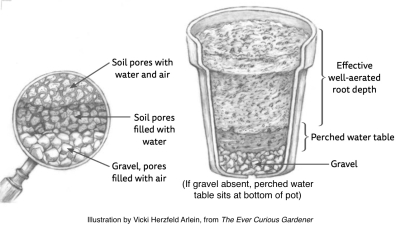 Coarse mineral aggregates — perlite, in my mix — make potting soils less dense, so water percolates more readily into the mix, through it, and out the bottom of the container. Other aggregates include vermiculite, sand, and calcined montmorillonite clay (aka kitty litter). I chose perlite because vermiculite breaks down with time and can contain asbestos. Sand is heavy, although this can be an effective counterbalance for top heavy cactii.

The peat moss and compost in my mix are organic materials that slurp up water like a sponge; plants can draw on this “water bank” between waterings. One peat to avoid is “peat humus,” a peat that is so decomposed that it has little water-holding capacity. Organic materials also buffers soil against drastic pH changes and cling to nutrients which are slowly re-released to plant roots. Otherwise these nutrients run out through the bottom of seedling flats and flower pots.

Peat is relatively devoid of nutrients but the compost provides a rich smorgasbord of nutrients. And I can brew it myself. Just letting piles of autumn leaves decompose for a couple of years produces “leaf mold,” which has roughly the same properties as compost.

Potting soils made with garden soil and compost might need to be pasteurized to eliminate pests especially weeds. Too much heat should be avoided, however, because toxins which injure plants will form and beneficial organisms will be eliminated. When I am going to pasteurize, I do so only to the garden soil in the mix; my composts get to above 150°F all on their own.

To pasteurize potting soil, put it in a baking pan, bury a potato in it, and bake it in a medium oven. When the potato is baked, the soil is ready. Pasteurization is not absolutely necessary; I pasteurize to kill weed seeds. Go out and buy a potting mix and, in all likelihood, that mix will be devoid of any real garden soil. You can mix up a so-called “soil-less” potting mix by sieving together equal volumes of peat moss and perlite. Since the mix has no garden soil or compost to supply nutrients, add 1/2 cup of dolomitic limestone, 2 tablespoons of bone meal, and 1/2 cup of soybean meal to each bushel of final mix. This mix has enough fertility for about a month and a half of growth without additional fertilizer.

I favor traditional potting mixes, which contain real garden soil. Real soil adds a certain amount of bulk to the mix, as well as a slew of nutrients and microorganisms. Real soil provides buffering capacity, which allows for some wiggle room in soil acidity.

Going forward, I’m going to experiment with coir and/or PitMoss, both possible substitutes for peat moss, the harvest of which is environmentally questionable.

For my first batch of potting mix for this season, I’ll stick with my usual recipe. Step one is to give the garage floor a clean sweep. 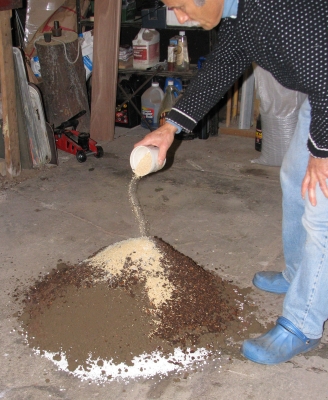 Then I pile up on the floor two gallons each of garden soil, peat moss, perlite, and compost. On top of the mound I sprinkle a cup of lime (except if I’ve sprinkled limestone on the compost piles as I build them), a half cup soybean, perhaps some kelp flakes.

This is a mixed bag of ingredients, but I reason that plants, just as humans, benefit from a varied diet. I slide my garden shovel underneath the pile and turn it over, working around the perimeter, until the whole mass is thoroughly mixed. 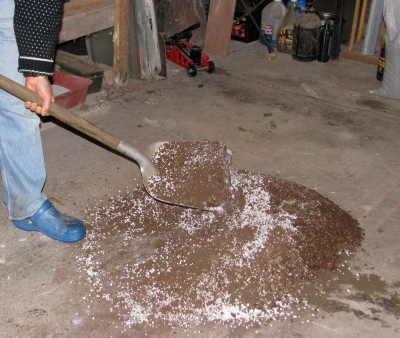 I moisten it slightly if it seems dry. When all mixed, the potting soil gets rubbed through a 1/2″ sieve, 1/4” if it’s going to be home for seedlings. 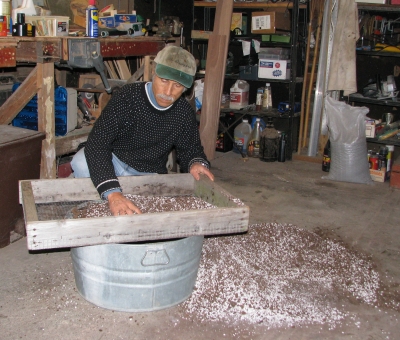 I end by clicking click my heels together three times and reciting a few incantations to complete this brew that has worked its magic on my seedlings, houseplants, and potted fruits each season.