Easiest Houseplant of All?!

What with the frigid temperatures and snow-blanketed ground outside, at least here in New York’s mid-Hudson Valley, I turn my attention indoors to a houseplant. To anyone claiming a non-green thumb, this is a houseplant even you can grow.

Most common problems in growing houseplants (garden plants also) come from improper watering. Too many houseplants suffer short lives, either withering in soil allowed to go bone dry between waterings, or gasping for air in constantly waterlogged soil. Also bad off yet are those plants forced to alternately suffer from both extremes. 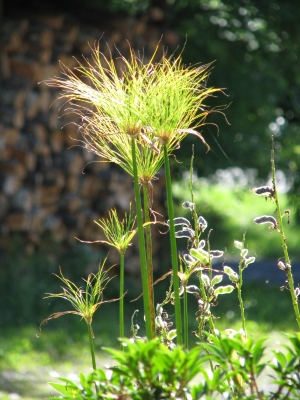 The plant I have in mind is umbrella plant (Cyperus alternifolius); it requires no skill at all in watering. Because it’s native to shallow waters, you never need to decide whether or not to water. Water is always needed! The way to grow this plant is by standing its pot in a deep saucer which is always kept filled with a couple of inches of water. What could be simpler?

One caution, though. The top edge of the saucer does have to be below the rim of the pot. Umbrella plants like their roots constantly bathed in water, but not their stems.

Lest you think that umbrella plant sacrifices good looks for ease of care, it doesn’t. Picture a graceful clump of bare, slender stems, each stem capped with a whorl of leaves that radiate out like the ribs of a denuded umbrella.

The stems are two to four feet tall, each leaf four to eight inches long. A dwarf form of the plant, botanically C. albostriatus, grows only a foot or so high, and has grassy leaves growing in amongst the stems at the base of the plant. There’s also a variegated form of umbrella plant, and a wispy one with especially thin leaves and stems.

Umbrella plants aren’t finicky about care other than watering. They grow best in sunny windows, but get along in any bright room. As far as potting soil, your regular homemade or packaged mix will suffice. Umbrella plants like a near-neutral pH, as do most other houseplants.

As the clump of stems ages and expands, they eventually get overcrowded in the pot, calling out to be repotted. You could move it to a yet larger pot, or make new plants by pulling apart, cutting if necessary, the large clumps to make smaller clumps and potting each of them separately.

One way wild umbrella plants propagate is by taking root where their leaves touch ground when the stems arch over. You can mimic this habit indoors if you want to increase your umbrella plant holdings without dividing the clump. Fold the leaves down around the stem with a rubber band, as if you were closing the umbrella. Cut the stem a few inches below the whorl of leaves and poke the umbrella, leaves pointing upward, into some potting soil — kept constantly moist, of course.

Though you may be unfamiliar with umbrella plant, you probably have come across its near-relatives either in the garden or in literature. One relative is yellow nutsedge (C. esculentum), a plant usually considered a weed and inhabiting wet soils from Maine down to the tropics.

The edible nutsedge, also C, esculentum, usually called chufa or earth almond, is not invasive, at least in what I’ve read from many sources, and in my experiences growing the plants. It’s a perennial that has been cultivated since prehistoric times and was an important food in ancient Egypt.

But esculentum in the botanical name means “edible,” and refers to the sweet, nut-like tubers the plant produces below ground. I grow this plant, and now consider it quite esculentum, with a taste and texture not unlike fresh coconut.

The main challenge with this plant is clearing and separating the almond-sized tubers from soil and small stones.

Storage improves their flavor, but they must be dried for storage, at which point they become almost rock hard. Give them an overnight soaking and they’re ready to eat as a snack or incorporate into other edibles or drinkables.

Umbrella plant’s other famous relative is papyrus (C. papyrus), a plant that once grew wild along the Nile River. In ancient times, papyrus was used not only to make paper, but also to build boats and as food. Papyrus looks much like umbrella plant, and being subtropical, also would make a good houseplant. But with stems that may soar to fifteen feet in height, except for the diminutive variety King Tut, this species is too tall for most living rooms.

The Egyptians never recorded their method for making papyrus into paper but the Romans learned the process from the Egyptians and Pliny the Elder, a Roman, wrote about it in the first century B.C.

Here’s how: You  put on your toga and sandals (the latter also once made from papyrus), and prune down a few umbrella plant stalks. Cut the stalks into strips and, after soaking them in water for a day, lay them side by side in two perpendicular layers. Make a sandwich of the woven mat surrounded on either side by cloth, to absorb moisture, surrounded on either side with pieces of wood, then press.

In Egyptian sunlight, you could figure on the paper being dry and ready for use after about three weeks. Cut it to size to fit your printer.