Finally, today, I’m planting seeds. “Too late to plant seeds,” you say? Or, perhaps you’re thinking that it’s way too early, with the coldest days of the year still about a month away. Well, the seeds I’m talking about aren’t vegetable or flower seeds; they’re tree and shrub seeds.

Planting seeds is a way to get lots of new plants at little or no cost. The seeds I’m going to be planting are ones that I collected this past summer, fall, and yesterday.

I already grow way too many plants but I need these plants for a barrier. The rear of my property backs up to a rail trail which, from spring through fall, is a wall of greenery in a swath about twenty feet wide. Nothing special, just whatever popped up there naturally, mostly bush honeysuckles and some viburnums nearby with black cherries and ashes further in. Grape or bittersweet vines clamber up whatever they can latch onto. Leafless, now, these plants don’t present a particularly pretty sight.

What’s needed is some winter color and greenery. Closer in, I’m planning a screen with winterberry (Ilex verticillata), Meserve holly (Ilex x meserveae), and arborvitae (Thuja occidentalis, this one purchased as plants).

A couple of larger trees — black tupelo (Nyssa sylvatica) and red maple (Acer rubrum) — will beef up the naturally rag tag mix of trees further in.

Nanking cherry in spring and summer

I’m also sowing seeds of Nanking cherry (Prunus tomentosa). It’s one of my favorite large bushes for its spectacular show of pinkish white blossoms in early spring and its equally spectacular show and abundance of delicious, juicy, small cherries in summer. All on a carefree, very tough and very cold-hardy plant.

Seeds of woody plants that ripen in early summer will sprout almost as soon as they touch down to soil. Red maple (Acer rubrum) is a good example of an early-ripening seed. 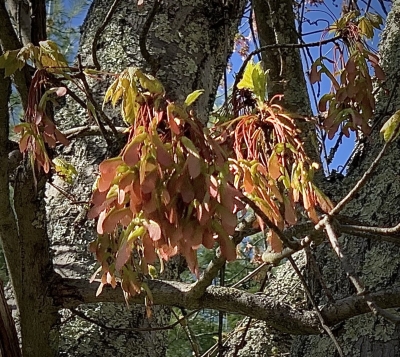 A friend collected some from his trees. I sowed them, they sprouted quickly, and I now have some healthy seedlings a foot or so tall. 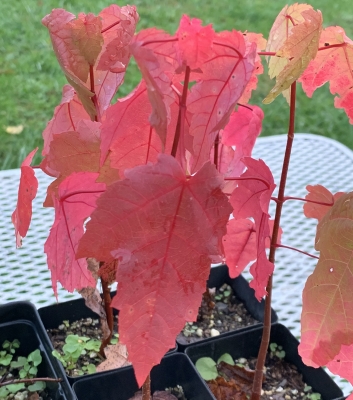 Many woody plants bear seeds that don’t ripen until late summer or early fall. If these seeds sprouted as soon as they touched soil, the resulting tender, young sprouts would succumb to winter cold. To avoid this, they sit and wait until they feel that winter has passed. They gauge this, via their hormones, by the amount of cold they’ve experienced. Levels of the hormone abscisic acid, which keeps seeds dormant, decrease as cold wears on.

Seeds typically need exposure of one to two months, or about 1,000 hours, in a moist, cold environment before they can be convinced that it’s safe to sprout. Cold temperatures, between about 30 and 45 degrees Fahrenheit, not frigid temperatures, are what flick this switch. Depending on location, such temperatures might be experienced partly in fall and partly in spring, or mostly in fall.

Other types of dormancy might also need to be overcome before a seed will sprout. Some seeds have a separate dormancy for root growth, overcome with warm, moist conditions. Root growth must precede shoot growth.

Warm, moist conditions also may be initially needed for seeds with especially tough coats, to soften them or give microbes the opportunity to erode the surface.

To start, I’m soaking the winterberry, holly, black tupelo, and Nanking cherry seeds in water for a couple of days, changing the water daily. Soaking does three things: First, it makes sure the seeds are well hydrated; second, it makes fruits fall apart to release their seeds; and third, it leaches out potential sprouting inhibitors. Sprouting inhibitors prevent seeds within moist, fleshy fruits from sprouting within. 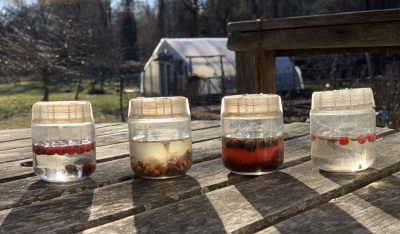 In a couple of days, I’ll plant my soaked seeds in flats of potting soil, water them, cover them, and set them in my garage. (The holly and winterberry fruits still are more or less intact so I’ll just plant the whole fruits in the potting soil.) In the garage, temperatures are somewhat moderated as compared with outdoor temperatures.

As soon as the seeds sprout — still, after many years of doing this, an exciting moment for me — I’ll move them to a bright window, the greenhouse, or, depending on outdoor temperatures, outdoors.

After a few inches of growth, individual plants get more space in their own pots or a nursery bed. And, after a year or two, they move to their permanent homes.

I took seeds for the hollies and winterberries from clonal plants, that is, plants of named varieties. Clonal plants are exact replicas of the mother plants from which they were propagated. The holly varieties were all female, the variety Blue Princess, except for one male, Blue Boy, there to provide pollen so the Princesses would bear their flashy red berries. I can’t remember the variety name of my female winterberry.

Each of the seedlings I’ll be growing will be a genetic mix, each different from each other and their mothers, although not necessarily obviously so. In the case of holly and winterberry, half of the seedlings will, theoretically, be the more desirable females. (One male can sire as many as about eight females.)

All this may seem like a lot of trouble when I could just purchase plants from a nursery. But I find looking at a mature plant that I planted very rewarding. The amount of satisfaction I get is indirectly proportional to the size of plant I started with. Hence, growing trees and shrubs from seeds is especially satisfying. 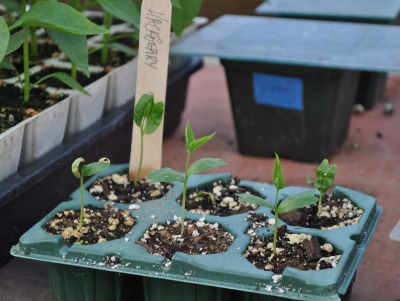