Why and How to Build

I’ve got to learn to look up more, you know, the way tourists do; natives generally fix their gazes straight ahead to a destination or downwards, in thought. I am reminded of this when a visitor (a “tourist” in this context) walks up my front path, smiles, and tells me, “I like your green roof.” So then I (the “native” in this context) look up and join in the appreciation. 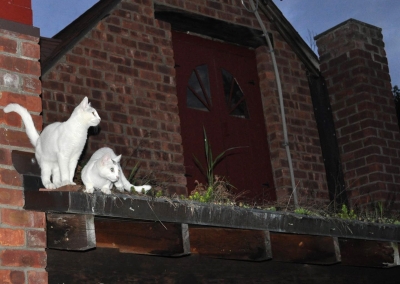 My green roof was born about twenty years ago. After fumbling too many times with packages or keys in the rain at the front door, the time had come build protection from the elements. Rather than cover just the area around the door, this cover would extend over a small patio. And rather than just shingle the roof, why not make it a planted roof, a “green roof?”

So my friend Bill and I built a sturdy, shallowly sloped roof supported on three corners by the walls of my house, and by an 8 x 8 white oak post in its fourth corner. 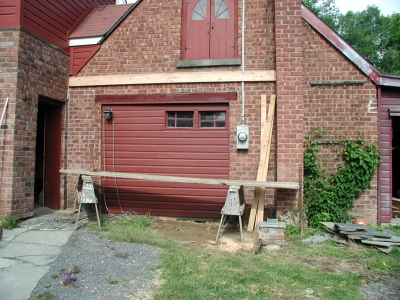 The roof had enough slope so plants could be seen from the path, yet not so steep that a hard rain would wash the soil away. 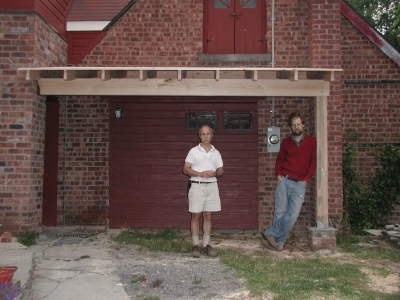 To keep the wooden structure dry, it was covered with EPDM roofing material and flashed with copper. A two-inch high lip of copper flashing along the low edge keeps plants and soil from sliding down off the roof. To prevent water from puddling at this lower end, I drilled holes and soldered short lengths of copper tubing at intervals into the lip, figuring that excess water would stream decoratively from each tube during rains. 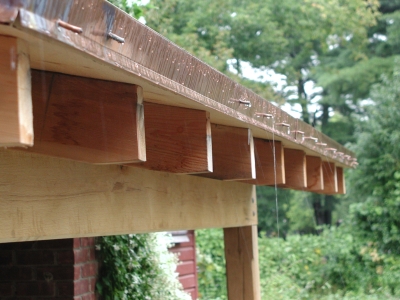 (It streamed, but not so decoratively, because some tubes kept getting clogged and the bottom edge of the roof was not exactly horizontal so the flow burden was taken up by only a few tubes.)

How and What to Plant

Next was the gardening part of the roof. To keep the weight down, for low fertility to suppress weeds, and for good moisture retention I made a planting mix of equal parts peat moss and calcined montmorillonite clay (often sold as kitty litter).

The root environment on the roof was going to be harsh for plants. Only a two-inch depth of root run. And, in contrast to the moderated temperatures within soil out in open ground, roots on this shallow roof would experience mad swings in temperature that would closely mirror that of the air. And even though peat moss sucks up and holds moisture, there’s not much peat moss moisture to draw from in 2 inches of rooting.

The plant choice, given the conditions, became obvious: some kind of hardy, succulent plant. I chose hens-and-chicks. After filling enough 24 x 10 inch planting trays with the planting mix, I plugged in hens-and-chicks plants every 4 inches in each direction. 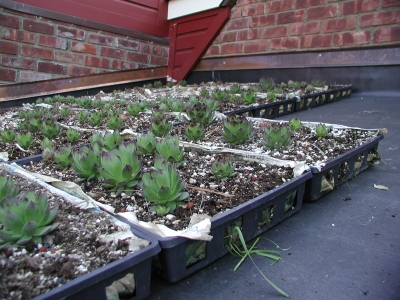 All this planting took place almost a year before the roof was readied for the plants, important so the hen-and-chicks could make enough “chicks” to spread and pretty much cover the planting trays, which otherwise would have left too much planting mix exposed to washing from rainfall.

Up the trays eventually went on sloping roof, laid down like tiles on a tile floor. Everything looked very neat and trim. 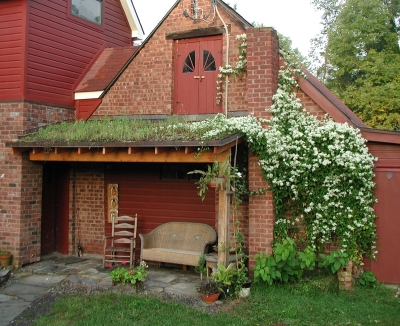 Despite very little intervention from me, the years have brought some changes to that green roof. This was not a garden area that I ever planned to weed, and I stuck to my plan. I figured that a green roof with a weed-free planting mix, sheltered on two sides by walls, and eight to ten feet off the ground would not harbor weeds.

I was wrong. Some weeds have moved in. Well, not weeds per se, because a “weed” is plant in the wrong place, and the roof is welcome to pretty much any plant.

Gazing up on my roof now, I see, in addition to the original hens-and-chicks, plenty of foxtail grass, quite decorative through the year with green shoots in spring and tawny, fuzzy foxtails in fall and winter. Also a single cedar tree about two feet high. 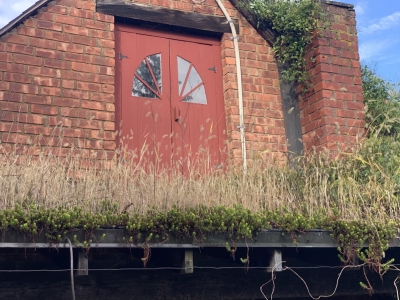 I had a hand in introducing another sedum, Angelina. This sedum has borne small, yellow flowers and, just as decorative, its fleshy leaves turn a deep red color in winter. Angelina started out as a single plant I set in a nearby stone wall; over time a few plants of it appeared up on the roof. 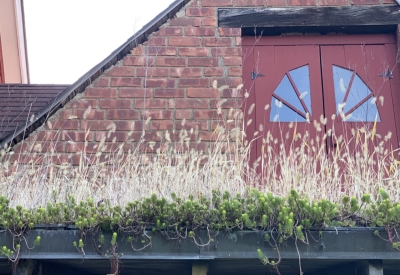 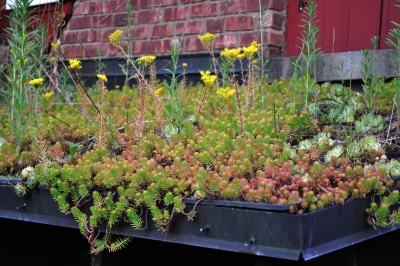 She looked good up there, especially when draped over the front lip. She also multiplied rapidly both on the wall and on the roof. To further encourage her, I grab bunches wherever in excess on the wall and toss them up on the roof to root.

One year I also planted oats left over from cover cropping in the vegetable garden. Oats’ extensive roots would be good to further knit together the rooting mix and lessen chances of rain washing it down. Planting involved nothing more than grabbing handfuls of oat seed, tossing them up on the roof, then waiting for rain.

Writing about my green roof has encouraged me to more frequently look up at it. It does bring a smile. Is that because there’s something anomalous about an aerial garden? 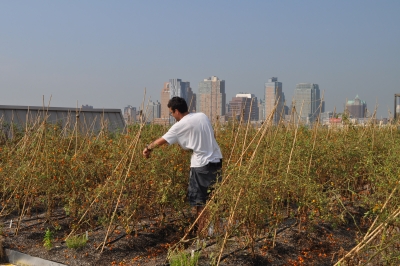 Urban farm high in the sky at Brooklyn Grange