I have some of the nicest volunteers in my garden. Some of them have been people, many of them are plants, and one of my favorites – among the plants, that is – is columbine. Years ago, I planted some native columbines, those dainty plants whose orange and yellow flowers hover on thin stalks above their ferny foliage. Since being planted, these wildings self-seed – volunteer, that is — every year in various nooks and crannies around my yard, such as in the thin crevice of soil between my bluestone front path and the adjacent stone wall. 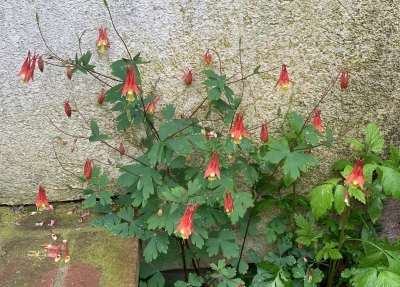 I once also planted cultivated columbines, the common McKana Giants, and their offspring have been volunteering around the yard as well. Flowers and foliage of these more cultivated sorts are similar to the natives, just bigger in all respects, which is not necessarily better. Or worse. Just different. 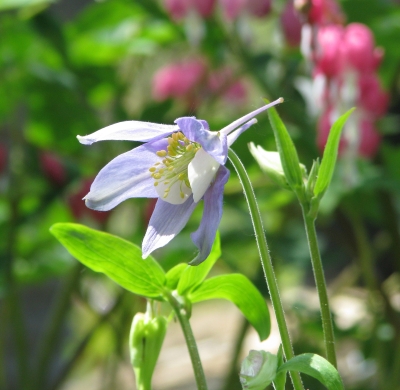 Colors of these larger columbines are different from that of the natives. My original McKana Giants sported various colored bracts and petals. Seedlings of these plants, 20 years later, have segregated out into just a few solid colors, and the cool thing is that each year’s colors are a bit different from the previous years’. 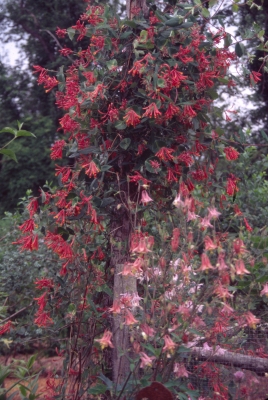 The once “high-bred” columbines back by my vegetable garden have mostly soft pinks flowers, a color that marries well with the scarlet of the trumpet honeysuckles behind them.
Right near my front door, poking through cracks between the bluestone patio and my home’s brick wall, is a big, beautiful columbine with dusky, purple flowers.

I do help out these volunteers by weeding out those in excess or interloping where they shouldn’t. 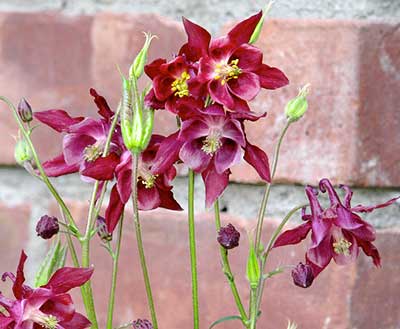 Not all my volunteers are beauties. Some are only practical.

For instance, in the greenhouse, I once planted claytonia, also known as miner’s lettuce. It’s one of many lesser known “greens” that thrive in cool weather so are good for adding variety to salads once fresh cucumbers and tomatoes are just a memory.

Since that first planting, late every fall claytonia shows up all over the place in the greenhouse with no help from me. “All over the place” usually applies to a weed, but when I grab a whorl of claytonia leaves and lift gently, the plant gives in and lifts, hardly disturbing the soil. 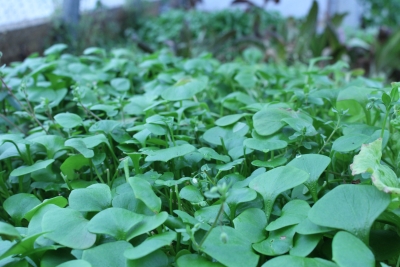 This past winter was relatively mild and, for the first time, I see a few claytonia plants out in the garden. Uh-oh. 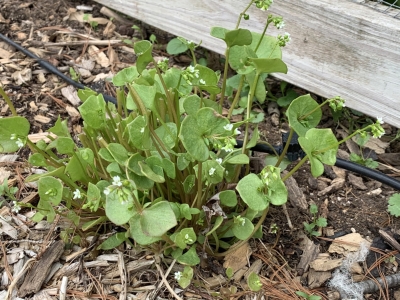 Years ago, I would sow celery seeds in flats in February for transplanting in May; the seeds take a long time to sprout and then the seedlings grow very slowly. No more. I once grew celery for winter in the greenhouse and, in spring, when seed stalks started pushing up from the plants’ middles, I decided to let the plants do their thing. They self-seeded, so all I need to do these days is weed out excess. Some of those excess can also be potted up for transplanting into the garden.

Mâche show up in winter in the greenhouse, again in early spring and then again in late summer. The early spring crop is from plants that overwintered; mâche, though delicate in texture and flavor, is perhaps the most cold-hardy and among my favorite of all fresh salad greens. In spring, plants go to seed and the seeds slumber in the ground until cool weather coaxes them to sprout. 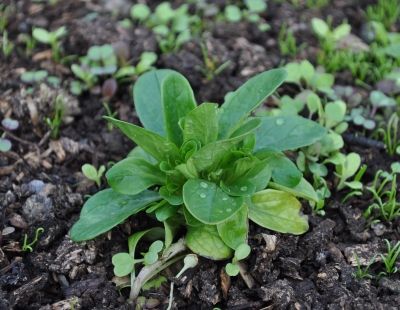 Cilantro, in contrast, only sprouts in late winter in the greenhouse and mid-spring out in the garden. It does so profusely. Like claytonia it never segues over into the category of “weed” because any excess is easily removed.

One volunteer that shows up only outside, in the garden, is garlic. This may sound like sacrilege, but I don’t grow garlic. Many years ago I did, and then decided to devote the garden space to vegetables whose garden-fresh flavor is truly better than anything I could buy. And anyway, I don’t use that much garlic. So I stopped planting it.

Garlic did not go away, though. It’s been propagating by the little offsets it produces atop its flower stalk to the point where it’s everywhere among the leaf-mulched berry plants adjacent to my garden. (It’s not allowed in my garden.) The mostly grassy plants hardly ever yield bulbs worth saving but the tender, grassy stalks are useful. If I call this a weed in my garden, the parts of my garden where I grow it are indeed very weedy. 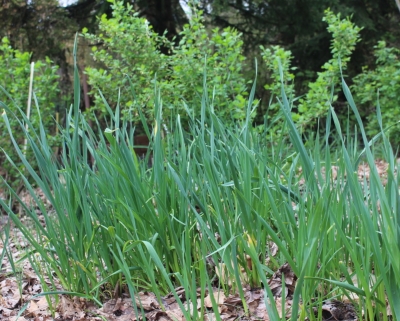 At the other extreme is one volunteer that once liked it here, but evidently no longer does. That’s dill, which used to self-seed in just the right amount, and usually would confine itself to the same corner of my vegetable garden.

A couple of years ago, only one or two plants showed up, and last year none. I’m not sure why. I want it to come back so I bought some seeds for this year. I’m hoping it comes back as a volunteer again in future years.