With the economy the way it is, forget about any hedges against inflation. Anyway, I’m more concerned about hedges against poor harvests, and that hedge is to grow a diversity fruits and vegetables. I’ve never had a year of poor harvests of everything. Cabbage and broccoli will revel in a cool summer during which peppers or melons hardly ripen. Bean beetles that might ravage green beans won’t touch tomatoes, okra, and other vegetables; they won’t even nibble soybeans.

Besides offering a hedge, that diversity also usually presents me with a spectrum of flavors and nutrition.

In fruits, 2011 was a particularly good year for pears and hardy and super-hardy kiwifruit. These kiwifruis are grape-sized, smooth-skinned cousins to the fuzzy kiwifruit of our markets. The flavor is similar, but better, and you pop the whole fruit into your mouth, skin and all. The plants are strong-growing vines, so pretty that they were for decades planted strictly as ornamentals, their gustatory treasures lying hidden behind leaves and ignored. In contrast to fuzzy kiwifruits, hardy and super-hardy kiwifruits can be grown just about everywhere.

Super-hardy kiwifruits, Actinidia kolomikta (“super-hardy” because they tolerate cold to minus 40°), ripened back in early August and hardy kiwifruit, A. arguta (hardy to minus 25°F.), started ripening in mid September. You know these fruits are ripe for picking when the first berries just begin to soften.

I harvested all my hardy kiwifruits once the first ones ripened. Some were firm and some were ready to eat. Kept under refrigeration, the firm ones slowly ripen; at room temperature, they ripen faster. Ripened berries have been, and will be, for a few more weeks, a colorful, sweet-tart, flavorful addition to morning cereal.
———————————-

Apple trees have never borne well here. The reason is because I am trying to grow them “organically.” That means giving special care to the soil, keeping it nourished with compost, leaf mold, wood chips, and seaweed. That means maintaining a diversity of flowering plants to attract beneficial insects. And it means minimum or no spraying of pesticides which, if needed have minimum impact on everything but the target pest(s).

Admittedly, my farmden is not ideal for apple growing. Six-thousand acres of woods (not mine, Mohonk Preserve’s), overwintering home to many pests, lie within 50 feet of my trees. And cold air settles into this floodplain of the Wallkill River, so morning fogs and dews linger longer than on higher ground to fester disease problems. So I do spray my trees, many times each season, with Surround (a commercial formulation of kaolin clay) and sulfur (a naturally mined mineral).

The apple trees looked so hopeful in the spring. No late frosts. Exuberant, new growth. Pea-sized fruitlets rapidly swelling to marble-size, then golfball-size, and larger. 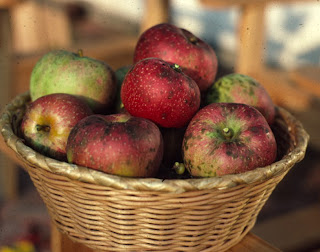 But something, some things, happened between those halcyon days of June and harvest. Fruits disappeared, dropped, became ugly with blotches and dimples. My farmden isn’t the only one to suffer such affronts. Basically, if you wanted to pick the hardest fruit to grow in eastern U.S., what fruit would that be? Apple! Why? Because of a  very few, but very serious insect and disease problems. Plum curculio, codling moth, apple maggot, apple scab, fire blight, cedar-apple rust, and powdery mildew are the culprits.)

Still, I haven’t thrown in the towel yet with apples. I noted this year that more attention is needed to late summer diseases, such as black rot and bitter rot. And the apples I do harvest might be few, but their flavors are supreme, in large part because of variety selection and perhaps due to terroir.

Apples are not the only fruit worth growing around here. Even if the apple crop is poor, this year I had and have plenty of, in addition to pears and kiwifruits, medlars, raspberries, and grapes. And every year seems to be a good one for pawpaws, persimmons, and blueberries. I’ll be digging into the 40 quarts of blueberries in the freezer just as soon as the last of the kiwifruits are finished.
——————————-

And speaking of hedges, green ones, my yew caterpillar is going into winter looking better than ever. This hedge started out as 4 boring yew bushes planted about 25 years ago and needing multiple prunings each growing season to prevent their overwhelming nearby windows, or even the whole house.

Inspired by Keith Buesing’s (of Gardiner, NY) fabulous green sculptures, a couple of years ago I began re-forming the yews. Yew is an adaptable plant, amenable to pretty much all manners of pruning, and the reformation is now pretty much complete. (The smiling mouth is still under construction.)

Multiple prunings are still needed each growing season, but they are mostly light cuts to polish and maintain the form.