It’s poppy season! Oriental poppies and Shirley poppies and California poppies. Unfortunately, no Himalayan poppies. And no bread seed poppies, yet. Each species has similarly delicate petals, yet each species also has its own character.
The Oriental poppies (Papaver orientalis), the first to open in my garden, have enormous heads of tissue paper thin petals in traffic-stopping red. I visited a garden last weekend in which were growing Oriental poppies with petals in soft pink, with white petals, or with, even more traffic-stopping than my fire engine red poppies, orange-red blossoms. 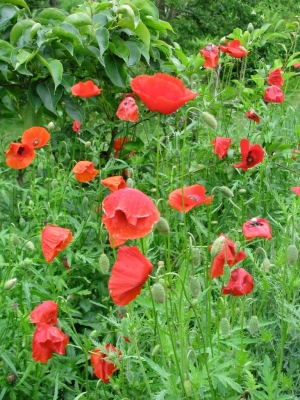 Corn poppies (P. rhoeas) are waiting their turn right next to my Oriental poppies. They have similarly fuzzy foliage but the foliage is more upright growing. And the flower heads, still closed in bud, are hanging downwards from the ends of thin, upright flower stalks. They will soon open to an intense red suggestive of blood, which is why paper reproductions of them are passed out on Memorial Day in remembrance of soldiers killed in war. These are the poppies that naturally populated the World War I battlefields and cemeteries, as immortalized in John McCrae’s poem “In Flanders Fields”
In Flanders fields the poppies blow
Between the crosses, row on row,
That mark our place; and in the sky
The larks, still bravely singing, fly
Scarce heard amid the guns below.
On to the more cheery California poppies (Eschscholtzis californica), which blanket California hillsides with yellow flowers having just a hint of orange. These poppies grows near ground level and also keeps their flowers there.
Like corn poppies, California poppies are easily grown from seed scattered on the ground in late winter. Growing either poppy requires faith because their seeds are almost as fine as dust. Yet the plants transplant poorly, so in situ sowing is the only way to grow them. I always get an abundance of Shirley poppies sprouting. The California ones also probably sprout but most get shaded out by the surrounding, more exuberant flowers and weeds.
Bread seed poppies (P. somniferum) are also annuals, but need no sowing. They self-sow profusely on their own, so this week I spent some time un-sowing them, i.e. weeding out excess. They grow quickly, rising to cap the 2 to 3 foot high flower stalks with what look like balls of crepe paper in pink, white, and lavender, with occasion flowers having only single rows of petals.
—————————————-
I forgot to mention Welsh poppies (Meconopsis cambrica), which actually started to bloom a little before the Oriental poppies. I originally grew Welsh poppies only to try my hand with its genus, Meconposis. Welsh poppy is easy, even self-seeding to some degree.
Himalayan poppy (M. betonicifoliais) the Meconopsis I’ve really wanted to grow. Unfortunately, it needs cool summer temperatures. Both times I raised plants from seed, they grew well until July, when they collapsed, dead, from the heat and humidity. 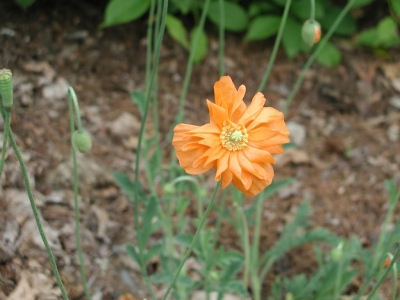 Welsh poppy produces a whorl of gray-green leaves from the center of which rises a flower stalk capped by a flower whose pale salmon flowers stare straight ahead, right at you. They’re not as pretty as the clear blue of Himalayan poppies, but pretty enough, especially considering the non-effort needed to grow them.
——————————————
Black locust trees burst into bloom at the end of May, in a particularly profuse display this year. Much better than the show of the blossoms was their sweet perfume suffusing the air all over the countryside.
—————————————–
Abundant rain and warm weather have made for a good crop of weeds this season. Their abundance was a little daunting, at first. (Yes, even to the guy that wrote a book titled Weedless Gardening. “Weedless” in, this case, means free from weed problems; I do do some weeding.)
The thing to do is to take a deep, calming breath, and do what you have to do: weed. In my garden, weeds release easily from the soft soil so I pull the few deep-rooted ones out, roots and all.
I use a hoe where a bunch of small weed seedlings are popping up, but – very important – a hoe with a sharp blade that I can skim along a fraction of an inch beneath the soil surface to separate the roots from the tops of small weeds. Being too small to have stored any energy yet, the plants die. 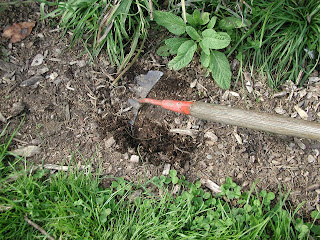 A number of hoes do this job well, including the colinear hoe, push hoe, scuffle hoe, pointed action hoe, stirrup hoe, wire weeder, and (the one I use) winged weeder. The thing all these hoes have in common is a sharp blade that sits parallel to the surface of the ground when you hold the handle in hoeing position. I recently realized a need for a hoe with a smaller blade that I could squeeze into the 4” row spacings in some of my vegetable beds so I bent the blade of a cheap steak knife at almost a right angle and taped and screwed its handle to a 5 foot length of bamboo.
Any of these hoes make quick and pleasant work of weeds if used regularly, which means before weeds grow big. Sometimes I’ll even run the hoe quickly down some rows before weeds even appear. This preemptive move snuffs out any weeds starting to germinate and keeps the soil surface loose.
As the season progresses, weeds will have a harder time of it because of drier soil and stiff competition from garden plants – if you and I keep on top of them now.